Marcin Rusak believes in life after death. Or perhaps more accurately, life within death. The Warsaw-born, London-based designer rescues unsold flowers from local shops and commissions floral designers to create furniture and lighting. He submerges the clipped corpses in black or white resin. From afar, his paneled screens and lamps look like they could be made of marble. A closer examination reveals the entombed flora, which despite their suspended state, continue to slowly decay. Over the years, the pieces will slowly reveal aging colors and voids in the languidly decomposing plants. For Rusak, this is where the beauty lies.

“If something is perishable or ephemeral, it creates this urge in you to preserve it and keep it,” Rusak says. “Nowadays it’s all about creating new stuff for the sake of creating new things. I always find it interesting to go the opposite way.”

Using a special mixture of resin—which takes him two or three years to concoct, due to the material’s inherently moisture-repelling qualities—he carefully submerges petals, stems, and leaves. To make his Flora screen, a nearly six-foot, two-paneled room divider, he sliced resin blocks to expose cross sections of the plants in a method he calls “flora prema.” In another treatment, “flora temporana,” which he used on the tables and sideboard on display at the show, Rusak carefully sculpts an arrangement prior to sinking its decomposing petals and leaves into the resin. Each method is a poetic showcase of the decomposition and mortality of his materials.

Rusak studied at Eindhoven Design Academy and London’s Royal College of the Arts and quickly developed an interest in botany. But his medium of choice also has a deeper connection to his family history. His father’s side of the family were flower growers for more than a century, though they halted operations when Rusak was a young child. Even so, he recalls the six large bamboo-filled greenhouses on his family’s property. “Growing up, I used them as my playground. There was this notion of decay everywhere,” he says. And today, once again, decay surrounds him. Only now, his playground is his studio. 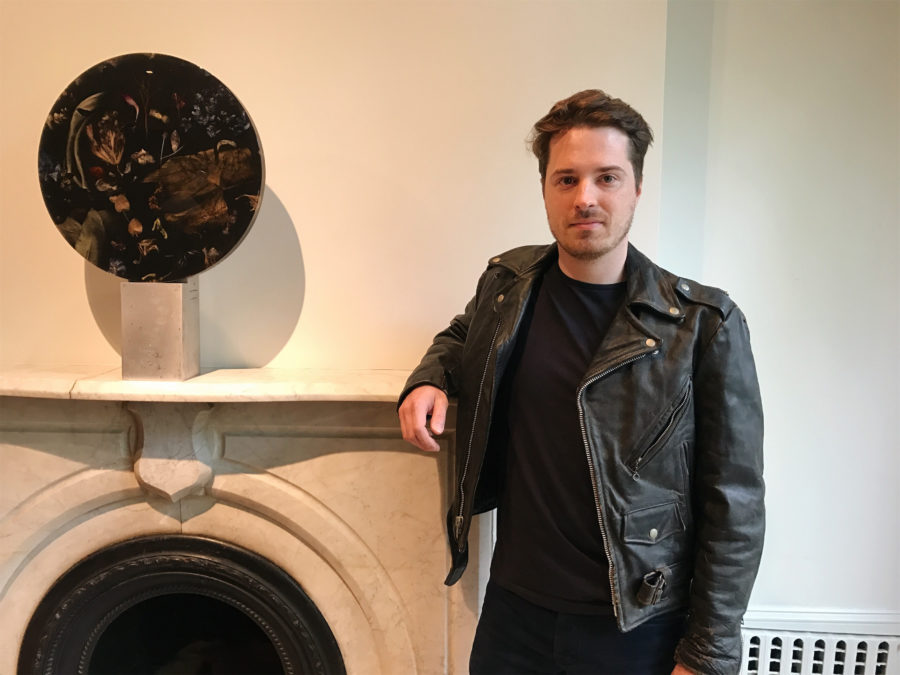