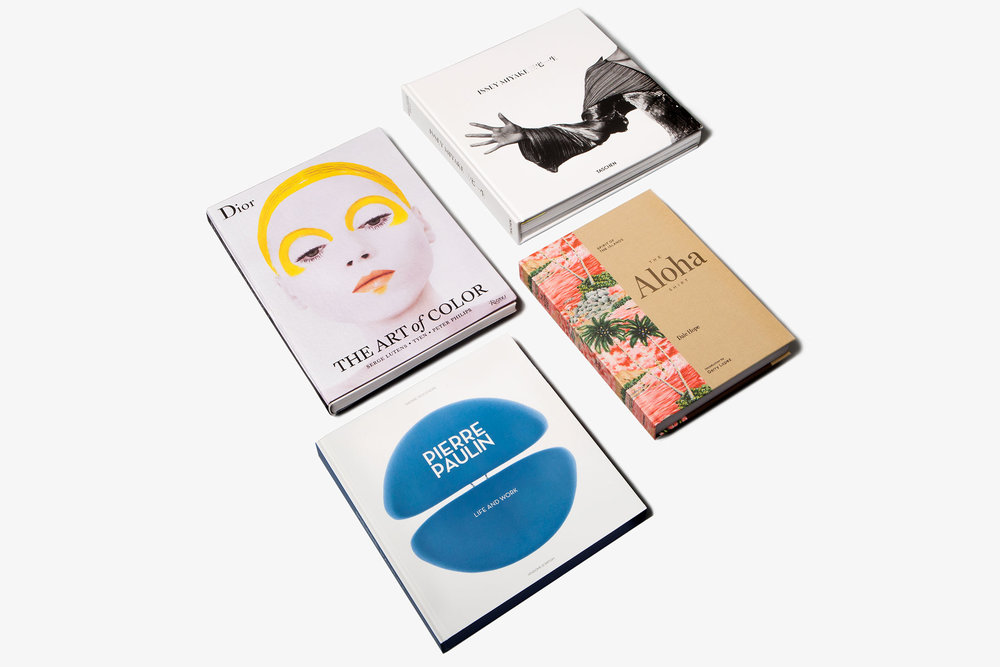 From the rich hues of Dior's cosmetics line to the garish patterns of one piece of classic tourist garb, our selections this month take us across decades and around the globe.

By Surface
Photo by Dani Vernon September 1, 2016
Share
Back

From the rich hues of Dior's cosmetics line to the garish patterns of one piece of classic tourist garb, our selections this month take us across decades and around the globe.

In 1969, Dior’s then-newly appointed creative director, Serge Lutens, launched Dior Cosmetics with the collection “Explosion de Couleurs,” which, among other things, offered 40 different shades of lipstick. For the campaign, Lutens brought on the surrealist-influenced fashion photographer Guy Bourdin, and the two styled and shot a model with thin, unbroken stripes of color extending from her temples. Nearly 50 years later, Dior: The Art of Color (Rizzoli) traces the history of the French house’s makeup division, which has continued to explore the creative potential of beauty, as depicted in archival images selected by art director Marc Ascoli and text by author Jerry Stafford. The story of Dior Cosmetics is told not chronologically, but chromatically, with each chapter devoted to one of 12 colors. The imagery shows the spectrum of applications that the bold shades have lent to fashion photography by iconic photographers including Craig McDean, Inez and Vinoodh, Bourdin, and more. These are contrasted with paintings and photographs by artists like Ed Ruscha and John Baldessari, whose works resonate with the fashion industry-produced images in surprising ways.

Issey Miyake (Taschen) brings the Japanese fashion designer’s story to life through floating wire bodies and rainbow color pleats. Spearheaded by Midori Kitamura, president of Miyake Design Studio, with essays by creative director Kazuko Koike and photography by Yuriko Takagi, the book spans the designer’s career, from his first clothing production line for Toyo Rayon in 1963 to his most recent collection. Good ideas aren’t born overnight, and, as Miyake’s chronology proves, creative genius stems from lifelong cultivation. His early flourishes find themselves consistently resurrected in unexpected ways throughout these pages, which culminate in an eerie yet beautiful series of shots that offers a faint glimpse of what the human spirit may look like.

The ultimate souvenir from paradise, a staple piece for any thrift store, and the uniform of many a chill dad: the Hawaiian shirt. As uncomplicated as the garment itself seems, its history is not. The Aloha Shirt: Spirit of the Islands (Patagonia Works) by Dale Hope traces the folk history of the token tourist purchase and explores the lifestyle it symbolizes. He begins with the mysterious origin of the shirt: Was it born from the hands of a humble Japanese tailor? Or inspired by Tahitian prints? Later, the book weaves through its early history and the golden age of the garb in the ’50s, surf culture, and celebrity ambassadors. This definitive guide to wearable aloha spirit is overflowing with Hawaiian prints and their adaptations, portraits of designers and textile manufacturers, and a catalog’s worth of the finished products themselves. But ultimately, the aloha shirt is not a passport stamp for the wardrobe, nor is it surfer garb or a high-fashion piece. It’s the symbol for a way of life very dear to the Hawaiian people: one of love, compassion, and humility.

Capturing the designs of Pierre Paulin, whose internationally lauded work departed from the linear restraints of midcentury design, Pierre Paulin: Life and Work (Vendome Press) depicts a bygone era of sleek departure lounges and pop-era icons. Paulin, the French avant-garde designer and architect, might be remembered for his instantly recognizable Orange Slice chair. Though he accepted elite commissions at distinguished residences such as the Élysée Palace in Paris, his ordinary products—razors, fans, kitchenware—were designed with equal zeal. Innovative material fascinated the modernist designer, who used colorful stretch jersey to soften his forms and conceal their inner structure. Paulin’s fondness for bright colors seeps off the pages—even the book’s edges are a brilliant blue.

The Bugatti Chiron's Beast Within