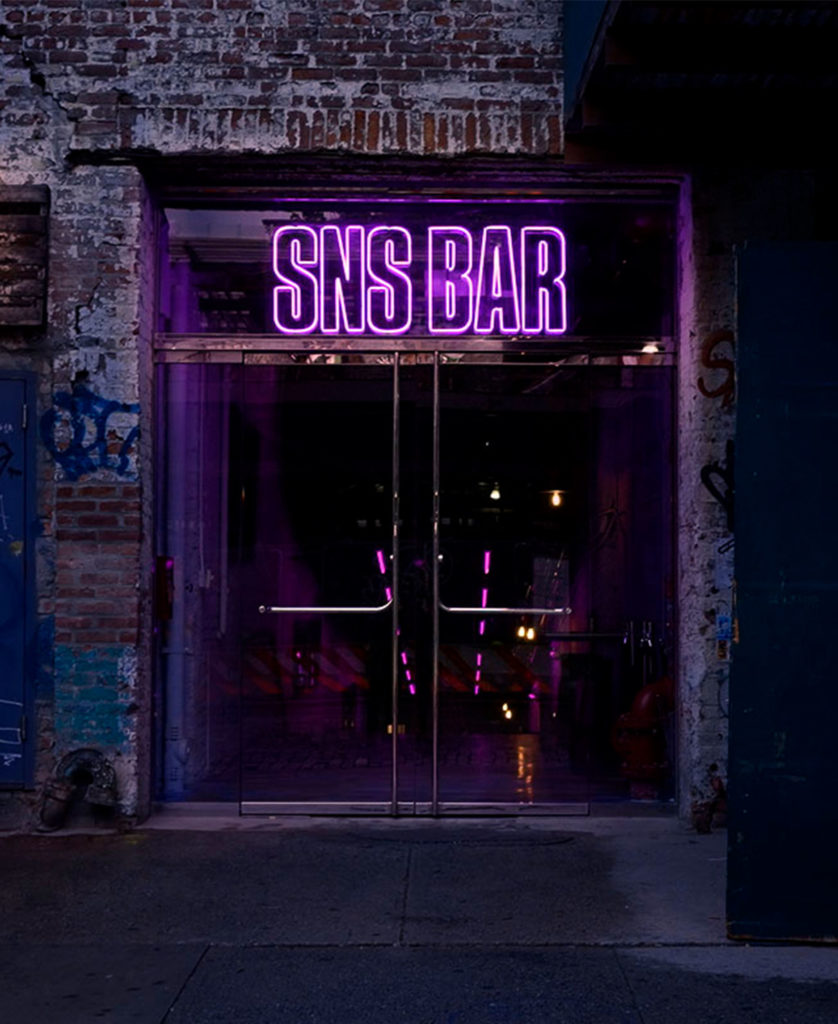 The Swedish-based footwear retailer gives patrons a reason to stick around after hours.

The Swedish-based footwear retailer gives patrons a reason to stick around after hours.

Playing up the experiential component that has become part and parcel for modern retailers, Sneakersnstuff (SNS) recently opened a bar below its storefront in the Meatpacking District, enlisting stalwart designer Jenny Askenfors of Bofink Design Studio to create an ambiance that channels the spirit of New York City.

“When I design a store for SNS, I think about a story,” Askenfors says. “The store upstairs is NYC by day. I wanted to make it feel like an art gallery with all these cool pieces. It’s not just about the shoes, but the attitude behind it. For the bar downstairs, I’m continuing [that message] by designing a space that reflects NYC at night.”

To achieve that, Askenfors casted the floors of the entryway tunnel in murky purple with blue streaks, punctuated by gold railings and purple neon lights meant to evoke the after-dark skyline. In the lounge, the color palette is used again in the tufted banquettes by Swedish designers Thomas Bernstrand and​ Stefan Borselius, which are illuminated by Danish designer Verner Panton’s spherical lighting fixtures.

A Scandinavian vibe permeates SNS Bar, an attribute enforced by a centerpiece plant installation and minimalist purple lacquer bar. Though, it wasn’t necessarily Askenfor’s intention. “I guess that’s who I am, and I understand why people say that,” she says. “I really try to design around what my idea of the city is. I just want it to be cool.”

So does Sneakersnstuff’s co-founder, Erik Fargerlind, who found inspiration in New York’s early 2000s nightclub scene, when DJs like Jazzy Jeff and Q-Tip played at venues like the now-shuttered APT. “We wanted her to set the stage for that comeback,” he says. “Sure, we are here to sell sneakers, but we also want people to connect and feel something more.”

Throw in a great cocktail, and it seems Fargerlind may get his wish.

The SNS Bar is located on 63 Gansevoort Street in New York.

Inside “Next Level,” NYCxDesign’s Most Ambitious Group Show