A typically tawdry destination and workaday hotel brand team up for the unexpected.

A typically tawdry destination and workaday hotel brand team up for the unexpected.

At first glance, Los Cabos, Mexico, and its new JW Marriott seem like an odd pairing. One is a rowdy beach bacchanalia on the tip of the Baja peninsula, the other an upper midmarket hotel chain looking to make a splash with an elevated debut. But together, they defy preconceived expectations, even bringing on architect Jim Olson, founding principle of the Seattle-based firm Olson Kundig, for his first-ever hotel commission.

Just east of San Jose del Cabo, Olson and Mexico City’s IDEA Asociados collaborated to design the structures with clean lines and a horizontal profile. Olson is known for melding the elements of art and nature together in a way that each doesn’t upstage the other. That recipe is palpable at JW. “The main concept was to create a straightforward layout with simple buildings that allow the landscape to take center stage,” he says. It’s easy to see why Olson wanted the manmade spaces to take a backseat. The resort is hemmed in by arid desert and tow-colored beaches, the Sierra de la Laguna Mountains to the north, and the azure crossroads of the Pacific Ocean and Sea of Cortez. At the entryway, a scattering of dry brush and succulents sets the tone. “The exterior of the hotel was intended to recall the feel of a grand Mexican hacienda but in a modern way,” says Olson, who implemented the open-air qualities of those traditional estates across the property, blurring the lines between indoors and outdoors.

The corridor in the lobby, flanked by rhythmic-set columns and shaded by metal roofs and trellises, frames the sea and seemingly sweeps guests toward the horizon. “The whole entry sequence was about becoming spiritually moved by the power of the ocean,” says Olson, who likens the experience to a sacred ceremony. (Fitting since his body of work includes numerous churches.) By balancing monumental scale with earthy materials and native landscaping, Olson created a calming environment—a rare respite in a resort zone dotted with all-night party venues with names like Cabo Wabo Cantina and Giggling Marlin.

The embrace of natural elements extends to the 299 rooms, which are done up in dark wood-accented screens, stone floors, and driftwood cabinets. Griffin Club, the resort-within-a-resort, echoes the common design language with soil- and sand-inspired hues that blend into the surroundings. “Continuity plays a key role,” says Olson, an idea that becomes evident while strolling along the “adventure-evoking pathways” that connect all the sections of the property and lead past tiered reflecting pools and works from the multimilliondollar art collection like Jaume Plensa’s meditative “Soul XII,” a stainless steel Buddha sculpture. The stone-walled Jasha Spa, inspired by pre-Columbian architecture, has quiet gardens that fringe an ancient sweat lodge; meditation sessions are conducted by votive candle. Then there’s Chef Thierry Blouet’s French-inflected Mexican restaurant Café des Artistes, where mezcal cocktails are served at an onyx bar and fixtures of glass drops hand-blown in Guadalajara hang from the ceiling. Of course, the star design feature lies just outside the front door: the cresting whitecaps of the deep blue. “Being close to nature is the greatest luxury,” says Olson. 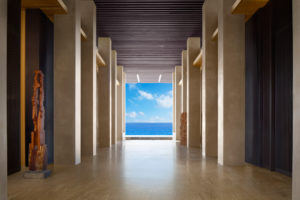