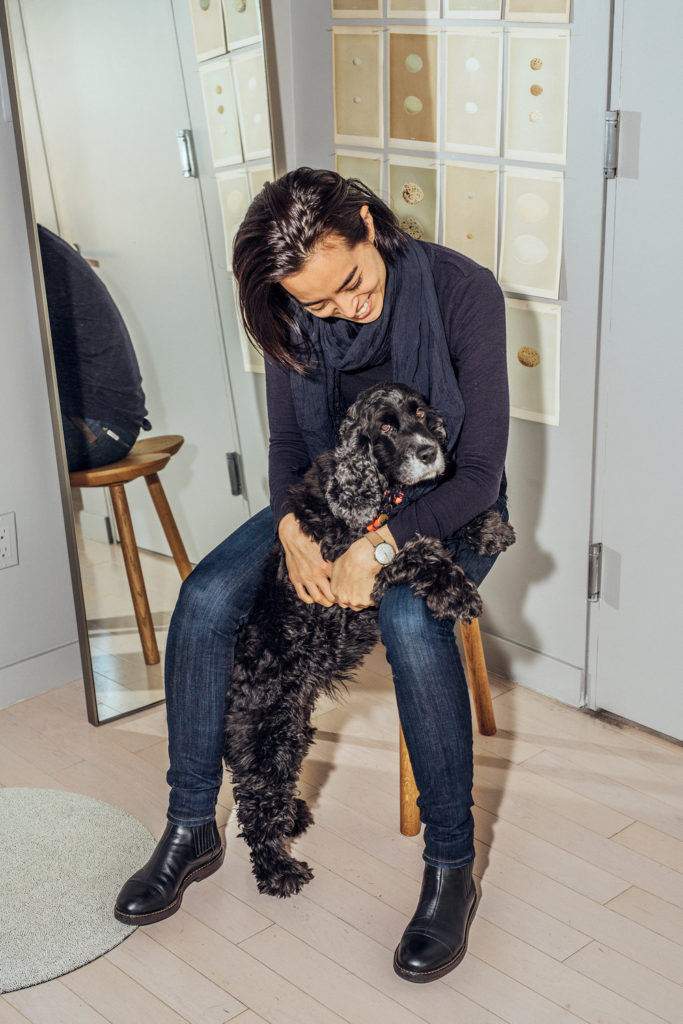 We speak with the Japanese-born, Brooklyn-based designer about being "in-between."

We speak with the Japanese-born, Brooklyn-based designer about being "in-between."

She seems very much at home. How long have you been here?

Six years. Everything happened [in 2010]. I got Oreo. I moved to New York. And I also showed my first product design [Seasons, a line of kitchenware, which picked up a first-place award at the Salone Satellite fair].

Well, I just launched a rug, Quill, in January with Nanimarquina. It was so refreshing to work on that. I’ve been doing a lot of mass-production pieces, and you never really know how those things get made. I was astonished by the handcraft. All of the rugs look the same from afar, but each one is slightly different. We will be showing it at Salone del Mobile this year.

How did that project come about?

I was doing another installation at Salone, and Nanimarquina’s booth was next to the one my work was in. We talked. Later, she said, “You should design something for us.”

Sounds like you’ve really made design shows work for you.

For some designers, there’s such pressure to make something new just for a show. The way I think about it is: If you don’t have anything to show, just don’t show. It’s not necessary to be moved by them—making a new thing, new thing, new thing.

What are these mass-production pieces you’ve been working on?

I do work for companies like Panasonic and Pyrex. That work isn’t on my website. They’re technological and industrial-design projects. I don’t show that work as my own, since I can’t oversee everything to the end, which I’m fine with. I keep that balance. That’s why I’m selective with the projects I take on. With lighting or stools or chairs, there isn’t a need for them, really. We have more chairs than human butts. Sometimes, it’s hard for me to find a reason to make one. But the work I do for mass production, there’s a pure need: a target user and a new technology. I see myself almost as a translator. The company has a technology, then there’s the end user. I’m in between.

So this is the model you’ve used for your business?

Yes. It’s necessary to make money. If I was in a position where I was only doing those types of projects on my website, it would be tough, and I would have to become more of a businessperson to manage payments and accounts. But with corporations, it’s very simple. You finish a job and you get paid. The other design work I enjoy, but I can’t count on that. You can’t really have a business plan based on that type of work. Life is life. I have to feed my dog.

What types of projects do you do for these corporations?

How do you divide your time between the one-off design projects and the corporate work?

I’d say it’s about 70 percent for the corporations and 30 percent for my other work. I’m in-between. I always like to be in-between. I’m from Japan, so I’m from the East, but I live in New York, so I am from the West. It’s similar with these different projects. The work that pays more tends to be less creative. One has a lot of freedom, but it brings less money.

I imagine it’s the same with your work-life balance?

I used to have a separate studio. But many of my clients are overseas, so there’s a big time difference—especially with those in Japan. With late nights and travel time between my home and office, it just didn’t work for me. I grew up in a design family. My mom was an interior designer and she had a studio in the basement, so it was a natural thing, living and working in the same place. It’s not like I stay in the office in pajamas. In the morning, I change everything, I take Oreo out, get coffee, come back, and start. I want my designs to be based on my daily life. This way of living and working lets me do that.