The collaboration between the artist and Porter, first announced in 2018, is finally headed to shelves.

The Takashi Murakami x Porter TZ BS-06 was slowly becoming somewhat of a white whale—or even a lost cause. Word of the Japanese artist’s first foray into sneaker design along with some tantalizing images first arrived online almost a year ago. Since then, it’s pretty much been radio silence, suggesting that perhaps the entire project had fallen through.

Now, however, there’s news that the long-awaited kicks would arrive at Murakami’s online store Tonari no Zingaro as well as select retailers as a weekend drop starting Friday, August 30th—a bit of a shocker all things considered. The artist himself, announced the release via his Instagram account over the weekend.

“For the first time in my life, I made a pair of sneakers from scratch,” he writes. “From conception to drawing sketches to selecting the collaborator and manufacturer, I’ve handled everything, start to finish, every step of the way. Seeing the finished pair, I felt deeply emotional. I’m truly glad I did it.” He went on to mention his long series of collaborations with other footwear brands including Vans, Issey Miyake, and perhaps most famously, Louis Vuitton. “This time,” he adds. “I truly got do everything from scratch and feel that this was exactly what I had wanted to do. I’m doing a fist pump in my mind!” 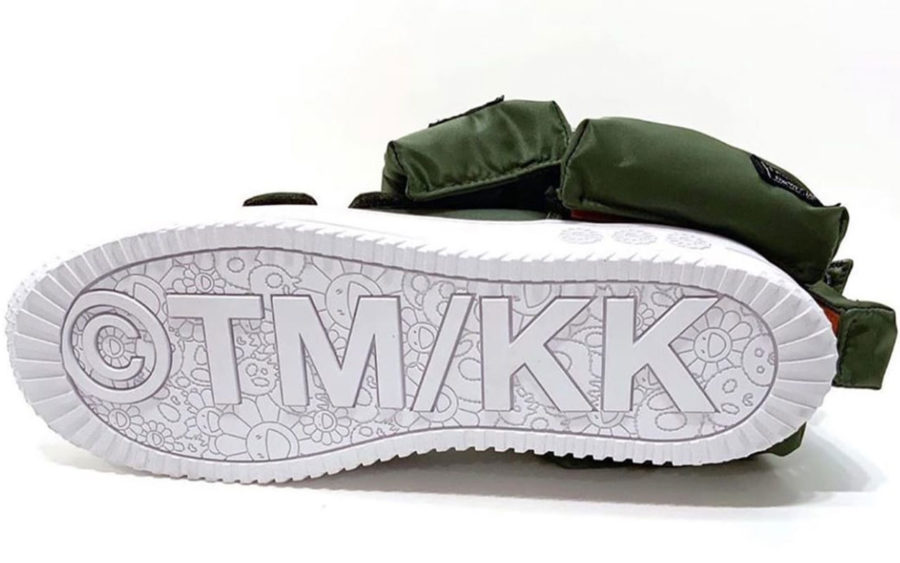 While the shoes employ Murakami’s famous flower brand, its role here is quiet and secondary, a change from past fashion projects. Instead, the emphasis is on motifs cribbed from Mobile Suit Gundam, a anime classic and a favorite of the artist. Martial-looking pockets and pouches available for accessorizing, a colorway dominated by tank green, a boxy sole, and more give the kicks a ready-for-war look, but with the sort of cartoonish proportions one might expect from Murakami.

As the artist adds, the whole project was a result of a meeting between him and streetwear legend Marc Eckō, one which led to Murakami’s participation in ComplexCon, a gathering of sneakerheads. After his reception there, the gears started moving. In a series of Instagram posts below, the artist explains his process.

👉 When I arrived on site on the first day of the event, I heard people had waited in line overnight to get in. And on the event floor, people recognized me, saying “OMG, it’s Takashi!” “That’s the real guy!” and “Shake hands with me!” They all seemed to know me and surrounded me excitedly. I was completely taken by surprise, as I had no idea how they’d even heard of me. I learned that these participants were referred to as Sneakerheads after the event. I still don’t exactly know why they came to know of me, whether it was through my collaborations with Kanye West, Louis Vuitton, or VANS, or else through the merchandise I produce. Whatever the case, it turned out I was somehow popular among Sneakerheads! And so it seemed imperative that I made sneakers myself. Around 2017 I asked Yuichi Wakatsuki @wakamoon , with whom I was working on producing bags, whether he thought it was possible for us to make sneakers, and he gave me a positive answer saying it should be if we asked around for manufacturers in Vietnam or elsewhere. Excited, I decided to go ahead with it. When I was exploring possible concepts, I noted that Balenciaga had come out with enormously bulky sneakers in 2016, and I considered them in the context of supercars and anime robots; that was actually an area I was well-versed in. I contemplated what distinctively Japanese sneakers might look like, and it hit me that it should resemble something like Mobile Suit Gundam’s Zaku. I decided that the ‘90s military-themed Zaku, which looked like a tank with its many pockets and bags, might especially be suitable. For military aesthetic I thought the fabric for flight jackets might work, and by association I thought of working with Porter @yoshidakaban.official , when by chance Porter reached out to me asking if we could collaborate on their Tanker Helmet Bags’ 30th anniversary. We decided to first collaborated on their Tanker bag, and then on the sneakers. Everything just happened to align, the timing worked out, and the project came to fruition. 👉 PART3

👉 The last thing we had to decide on was the package design. JNTHED, the otaku illustrator who designs mechas for my animation series 6HP @studio_poncotan and CGI/live-action sci-fi film Jellyfish Eyes, did the illustration. The concept for the box art is an homage to Ko Yokoyama #sf3d , the author/creator of SF3D, the shining star of the ’90s plastic model industry (we got his blessings). The project therefore aims to present a pair of sneakers that resulted from the marriage of the ‘90s Japanese otaku taste and the sneaker context to Sneakerheads, the fans of ComplexCon. This weekend we are finally releasing them at Tonarino Zingaro. I’m thrilled to the core. 🙇‍♂️

Murakami certainly has some right to be thrilled. More than a strong first effort, these are some genuinely desirable kicks. The current price of $611 and the limited run, however, means that prices on the secondary market are bound to be exorbitant. Set your watches and your clocks if you want in on the ground floor with these.

Nina Chanel Abney and Jacolby Satterwhite to Land at...

The Rubell Museum Eyes Expansion to Washington, and...

Designer of the Day: Andrea Claire