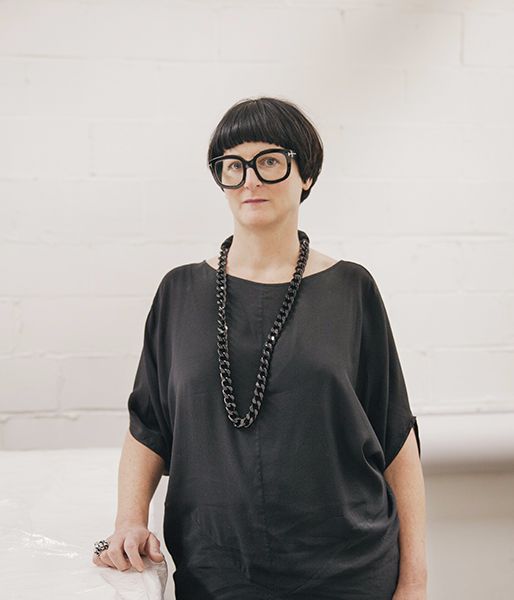 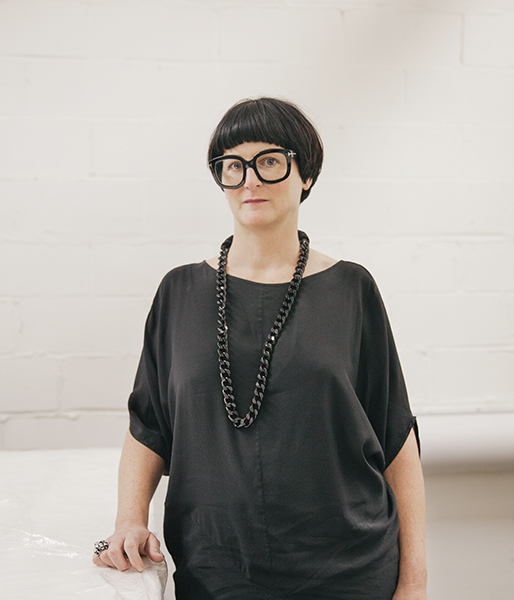 Tara Donovan in her studio. … 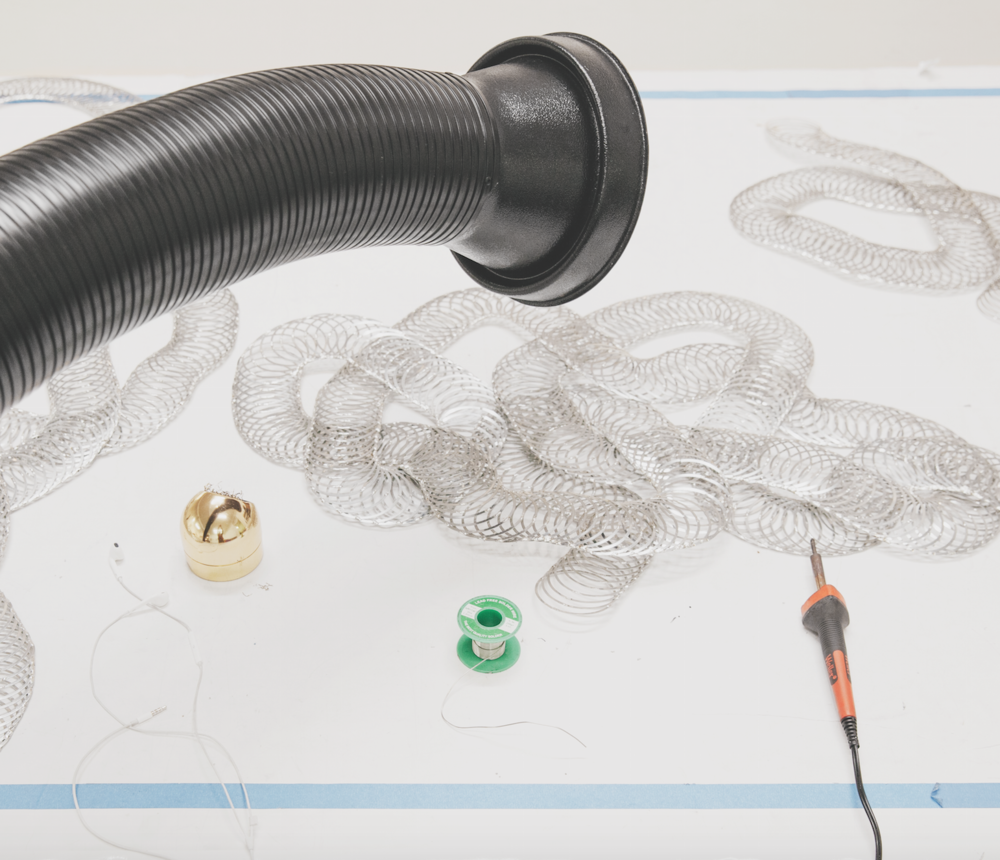 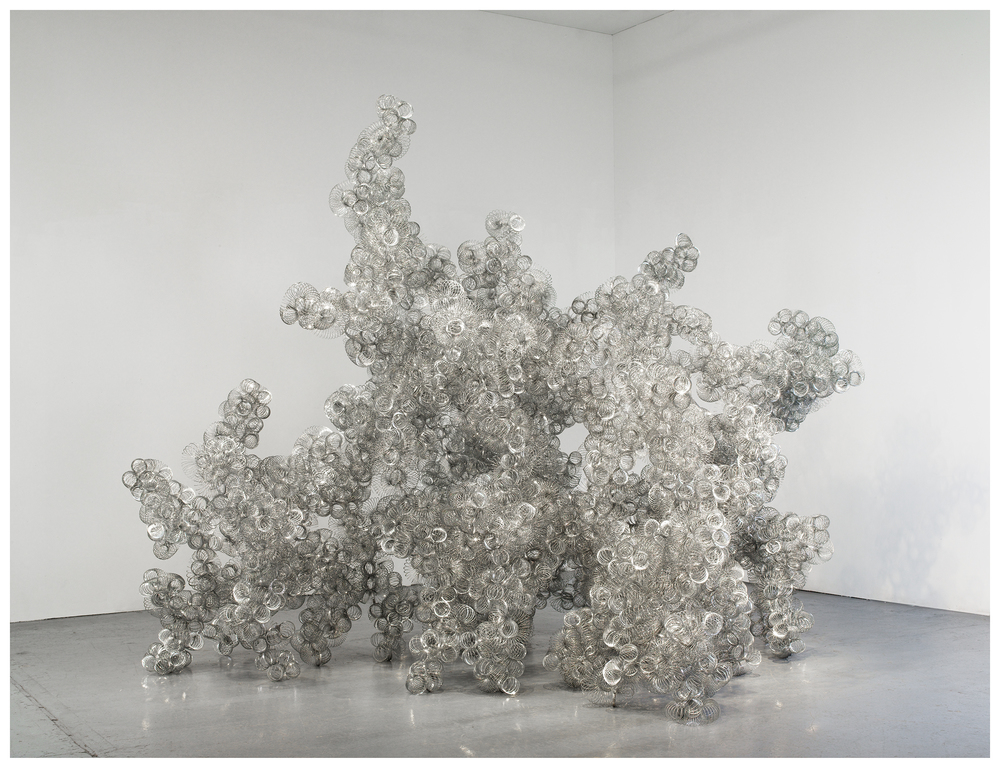 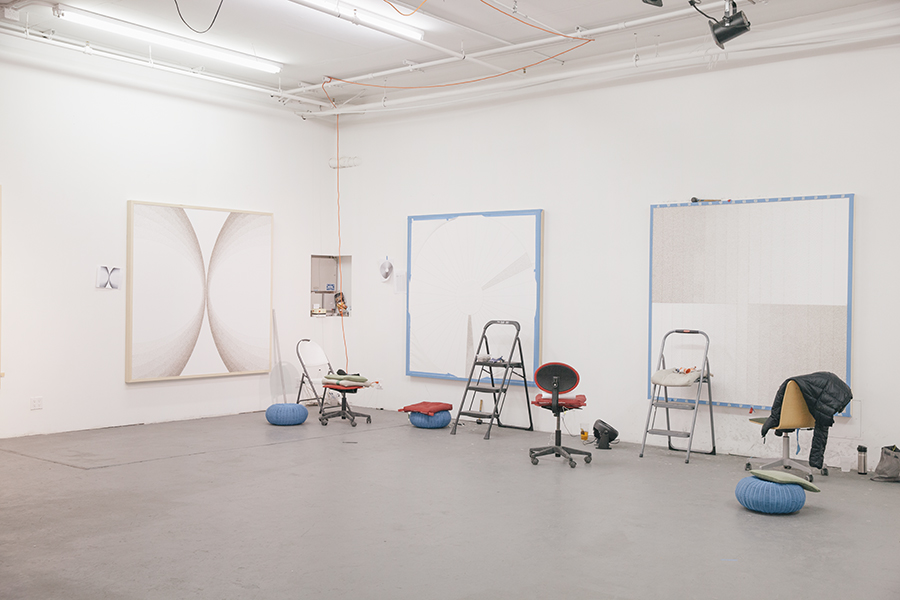 A view of Donovan's studio. …
art

Tara Donovan Talks Process, Inspiration, and Her Place in the Art World

With a solo exhibition at New York's Pace Gallery (through June 27) and a large-scale installation coming to the the Parrish Art Museum in July, the artist opens up her studio in Long Island City, Queens to discuss her latest work.

With a solo exhibition at New York's Pace Gallery (through June 27) and a large-scale installation coming to the the Parrish Art Museum in July, the artist opens up her studio in Long Island City, Queens to discuss her latest work.

You’ve got a pretty orderly setup here, which makes sense, as your works are very meticulous and, indirectly, a reflection of the labor that goes into making each.

I’m always trying to push a kind of perceptual shift into the foreground, shifting viewpoints, and so forth, and that becomes more important than labor. I’m not burdened by the labor in any way, shape, or form – it kind of just becomes a mechanized process – but if there were a machine that created it, perhaps I would. I also still believe in the handmade; there’s something to it.

There are different workshop stations here for varying series, and also for the stage of production of each. How many staff members do you currently have at the studio?

About a dozen. Not everyone’s full-time. There’s something very meditative and communal about working with people in that way, and I’ve worked with assistants for years – they become like family to me. Some of my assistants have been around for 10 years; I don’t think anybody has been here less than three. We all work really closely, and it’s fun: We really get to know each other at intimate levels.

Your large-scale works must require a lot of planning and management.

The scale of the work itself is so important – that it be choreographed properly for each scene. Often the scale of the work becomes what it is because of the space that it is in. The process of making, for me, comes after I’ve sort of figured out what I want the material to do, and what it is that the material is revealing in some kind of phenomenological or perceptual kind of way.

There’s an element of phenomenon in your works.

That’s ultimately what I am striving for. With my new prints, there’s parallax, almost like a lenticular lens … from the the side, there’s a graphic underpinning that really reveals itself only from the angle. But when you look at it from straight on, it reads as a blur or as a fade. This is where the planning comes in: It’s all done by the density and the layering. It’s very mathematical. There’s one that we’re doing that’s very much based on the grayscale, and so we’ve planned and marked areas to place four pins, then three pins, and then two pins, and so forth, defining these things so that it’s actually extremely methodical.

Is staying organized very important to your process?

Yes, very. Also, just for my sanity. I don’t think most of my assistants would have it this organized. I’m very adamant about the organization, though, because I can’t stand the clutter!

It’s interesting to hear you use the word “choreographed”. Previously, you’ve distinguished your sculptures as being “site-responsive,” as opposed to site-specific. How do you take a given venue or space into account when you’re conceiving of a piece?

It goes back and forth. Actually, the conception of a piece rarely relies on the space where it may wind up. [Laughs] Sometimes it does, but really, I always start with materials, and it’s always an investigation of some sort. I don’t have a set way of finding our sourcing materials, though: It’s usually jut kind of happenstance – I’ll see something that might reveal some kind of quality that I find interesting, and then it becomes a question of figuring out what it is that the material can do.

How do you then adjust a piece to fit its surroundings, once a venue is confirmed?

Things work more successfully in some spaces than others, and sometimes spaces are a real challenge. I had a traveling show that went from the ICA Boston to the Zaha Hadid-designed building in Cincinnati [at the Contemporary Arts Center’s Rosenthal Center], then to the Des Moines Art Center, and the Museum of Contemporary Art in San Diego, and all of those spaces were vastly different. I remember when I first saw that Zaha Hadid building, I was like, “Nooo wayyy!” You know? [Laughs]

That must have been one of the more challenging ones.

It was incredibly challenging and a struggle, but was also amazingly rewarding to make them work in that space, the pieces really took on a new life. I wouldn’t say it was the best scenario for the work, but I sort of liked what happened to the work.

How does it feel to dismantle your large-scale installations? Do you have an emotional reaction when they’re removed and rebuilt?

No, I don’t have a sentimental part in my body. [Laughs] I don’t get attached to it in that way.

Your works uncover and champion the beauty of everyday materials – plastic rods, nails, pencils, mylar, index cards, cups – all the while creating a delicate balance between order and chaos. There’s a wonderful sense of surprise in discovering the material; figuring out what it’s made of seems to be a central part of the sensorial experience.

Totally. There’s a beauty to these ordinary objects, elevated and shown and highlighting a texture that you may not have realized at first. As I said, its just happenstance. A lot of times, they start in really simple places, like Staples or the grocery store – places like that. Then I’ll reach out to the manufacturers directly and go from there.

Do you feel the materials find you in a sense? Perhaps you’ll stumble upon something and will revisit it later?

When we start a project, we try and set ourselves up with these problems, and then try and figure out how to solve them. For years, I feel like I’ve constantly been trying to figure out how to make an outdoor sculpture, for example, and I’ve never really successfully been able to do it. And that’s sort of how the Slinky started working for us as a material – like, “Well, maybe if we start with something metal…”
It’s a very organic process. I wish it weren’t, because then that would make my life easier. It’s an organic-but-difficult process.

You’ve been associated with schools of Minimalist, Conceptual, and Process Art for that method of working – of balancing intuitive explorations within a set of rational constraints. Do you identify with those movements at all?

Absolutely. My early inspirations were Eva Hesse, Richard Serra, Jackie Winsor – obviously for all different reasons, but also for common ideas that dealt with process. I also now align myself with artist of the Light and Space movement and feel like I fit somewhere in between. It’s a constellation of inspirations.

There’s also an element of sculpture to your new “pin drawings” and printmaking series with the Pace Gallery.

My early work was primarily sculpture. And then I started doing prints as a way of making drawings with sculpture – printmaking, for me, is very much outside of the norms of traditional sense of printmaking. One of the first print projects I did was aimed to the edges of adding machine paper, and then printed in a hydraulic printing press – I’ll show you our studio press in a minute – and I remember first being invited to do those prints and thinking, “No, I’m a sculptor, I don’t do that.” Then began discovering this new way of making drawings and that really opened up the process to include other mediums.

It’s as if each piece is a reaction to an artifact – a result of sculpture, in a way.

In addition to the Pace show, you have a number of projects in the works, including an installation at the Parrish Art Museum, where you’ll show these new Slinky pieces.

Terrie Sultan [the director of the Parrish] and I have known each other for a very long time – since she was a curator at the Corona, and I was a student when I was 18. I’ve known her for – you do the math; I’m now 45 – a long time. So she invited me to do a project there over this summer. The prompt was basically, “Do what you want!”