For the photos in Midnight Modern, Tom Blachford captured local architecture in a new light (the moon’s).

It’s the middle of February when I connect with Australian photographer Tom Blachford. There happens to be a full moon over Palm Springs, where he is, which means he’s about to get to work. In the past three years, he’s made five trips from Melbourne, where he is based, to the desert town that is nestled in Southern California’s Coachella Valley. These efforts have culminated with the release of his first book, Midnight Modern, out this month from Powerhouse. Collectively a celebration of the midcentury modern architecture that shapes the Palm Springs landscape, each of the 60 featured photographs offers a depiction of a residence illuminated by moonlight, often creating an effect that highlights the structure’s relationship with its arid, rocky surroundings.

Blachford fell in love with the city’s uncomplicated, geometric forms during a visit in 2013. That’s when he first set eyes on 1070 Apache Drive, a circa 1950s “Alexander” home, so-named for the prolific Alexander Construction Company that developed the area in the ’50s and early ’60s. Suspended in a magical moment, the house had caught the light of the setting sun, its asymmetrical butterfly roof—a hallmark of the period’s architecture —aglow, while three vintage cars sat out front. “It felt like I had been transported back in time,” Blachford recalls. “That’s the feeling I’ve been chasing with this series ever since.”

Perhaps that’s why his photos have a cinematic quality—which is actually appropriate considering that the style owes its rise in Palm Springs to the Hollywood elite who flocked to the then-fledging resort destination beginning in the 1930s. Blachford’s production process even resembles that of a film’s, in that it can get a bit disorienting. On a typical day, he might wake up at 5:30 a.m. to scout for homes and, subsequently, willing homeowners; twenty-four hours later, he’ll being turning in after a night of shooting. “It’s quite a roller coaster,” he says.

Take that along with the jetlag arising from regular trans-Pacific flights, and it’s probable that Blachford has racked up a fair amount of sleep debt. But it’s a small price to pay for the steadily increasing recognition the project is finding among the locals. During his initial two trips, “I didn’t know anyone or how to approach people, or what to say when I did,” he says. “I didn’t think people would be cool with me hanging outside their house at 2 a.m.” Now, arriving unannounced on modernist doorsteps, he gets a “yes” around nine out of 10 times. When he was granted access to the notoriously selective Kaufmann house, designed by Richard Neutra in 1946, it felt like a holy grail of sorts. “It was made famous by Slim Aarons’s photo of it [in 1970], and Julius Shulman took another great photo of it [in 1947],” he says. “I’m after that.”

Given how frequently he travels to Palm Springs, and how much of a pain he admits the commute is, why doesn’t he just move there? “This place is so special, I wouldn’t want it to become my everyday,” he says. And so, he remains a visitor, documentarian, and nightcrawler. 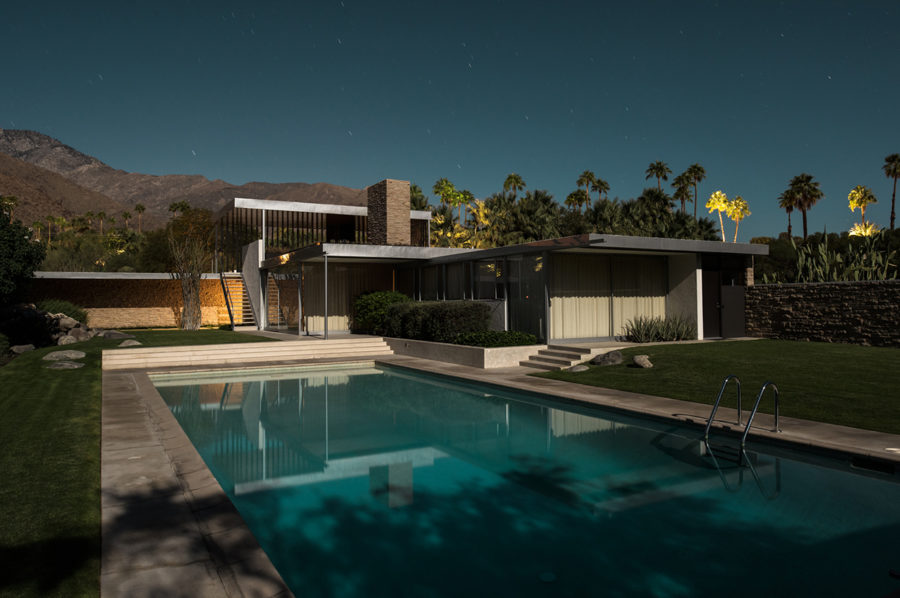