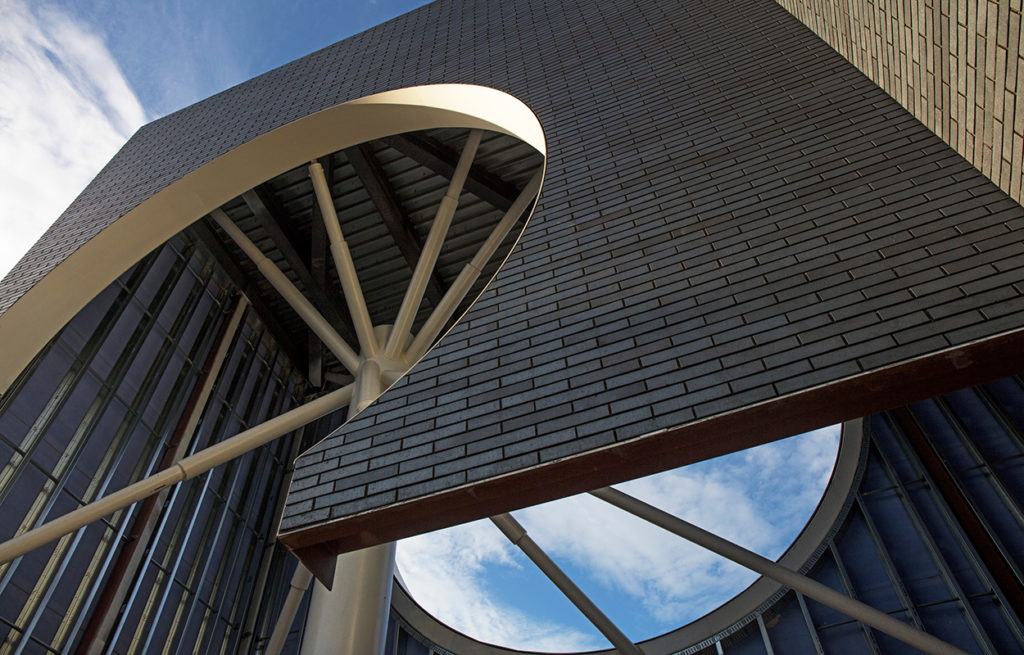 Designed by Michael Maltzan Architects, the Moody Center fits right in while making a statement.

Designed by Michael Maltzan Architects, the Moody Center fits right in while making a statement.

The Los Angeles-based firm Michael Maltzan Architects is known for designs that respond to context, in that the minds behind them interpret surrounding elements as architectural gestures. This tendency is on full display at the new Moody Center for the Arts at Rice University in Houston, from its overall shape to the details inside. Housing classrooms, studios, performance spaces, and galleries, the structure mixes transparent layers and geometric volumes. Glass windows circle the perimeter of the ground floor, letting in a view of the quad. Seemingly hovering above, the upper level is a solid mass of silver-gray bricks. Meant to echo the aesthetic of nearby university buildings, its surface also adds to its ethereality. “The bricks are glazed in magnesium oxide, which lends a dynamic sheen,” says the firm’s founder, Michael Maltzan. “It changes with the sky.” At different points around the facade, gaping perforations contain circular voids supported by what Maltzan calls “starburst lanterns,” steel posts capped by a spray of beams—a reference to the historic oak trees on campus. “They symbolize the mission of the center,” says Maltzan. “Art is the core or trunk of the program, but ideas radiate out like branches.”

David Basulto is the founder and editor-in-chief of ArchDaily.

Above and at left: The Moody Center for the Arts. (Photo: Nash Baker) A view of a “starburst lantern.” (Photo at left: Geoff Winningham)