With a new gallery exhibition at Sperone Westwater in November, director and artist David Lynch discusses storytelling, consciousness, Transcendental Meditation, and his initial infatuation with becoming a painter.

The American polymath David Lynch is perhaps best known for shaping a distinctive cinematic sensibility that draws from surrealism and noir, with totemic films like Blue Velvet (1986), Mulholland Drive (2001). Over decades he has projected his subversive imagination to the mainstream, as with his cult television series Twin Peaks (1990-91), and it’s recent revival, Twin Peaks: the Return (2017), whose languorous, stream of consciousness storytelling confounded the staccato tempos of the attention economy. Throughout his life Lynch has also practiced painting, sculpture, and furniture design, exhibiting widely around the world, often in trans-disciplinary surveys of his work. His creative provocations have consistently opened minds, and indeed the mind has been a central focus of his work as a proponent of Transcendental Meditation as the founder of the David Lynch Foundation.

I interviewed David Lynch on a warm August evening in Los Angeles at an event at the La Brea Tar Pits hosted by the Natural History Museums of Los Angeles County. This encounter was one in a long series facilitated by ForYourArt, the L.A. arts organization I have collaborated with over many years, with artists ranging from John Baldessari to Kanye West to Barbara T. Smith to Luchita Hurtado—who, like Lynch, is deeply committed to the powers of Transcendental Meditation.

My conversation with Lynch took place inside the Serpentine Pavilion designed by the Spanish architects Lucia Cano and Jose Selgas of SelgasCano in 2015, when it was first installed in London at the Serpentine Galleries. In 2019, the London-based creative incubator Second Home transplanted the building to L.A., where it has found an inspired new life under the California sun, like Lynch and so many others who have pushed westward.

This was not the first time a Serpentine Pavilion hosted Lynch’s boundary-crossing work. That was 2012, in London, in a sunken structure conceived by Swiss architects Herzog & de Meuron and Chinese artist Ai Weiwei during one of the multidisciplinary marathons I curate each autumn coinciding with the Frieze Art Fair. It was an honor that Lynch participated in that year’s “Memory Marathon” with a new short film created specially for the event, in which the director appeared on screen, peering into the darkness of his own hand held over his eyes, while an assembly of human-like forms drifted in and out of frame—intercut by a jarring soundscape of speeding gunfire and black and white imagery of an airplane in distress.

As my mind returns to this film and it’s harsh alternation between calm and chaos, I think of Lynch’s daily practice which has remained a constant underpinning his creative process since 1979: Transcendental Meditation. He has described it as “a mental technique that allows any human being to dive within, transcend, and experience the source of everything.” It should come as no surprise that an artist working across such heroically varied disciplines, mediums, and genres as Lynch would dedicate himself to checking in with this boundless state of mind.

Lynch’s contributions to cinema and television are as singular as they are staggering. Never content to be confined to this legacy alone, he has maintained a decades-long career as a painter as well. While many are aware of this, perhaps fewer understand that his exhibition history as such predates his life as a director. In 1967, Lynch showed his first works at Vanderlip Gallery in his native Philadelphia, Pennsylvania, whereas his first feature film, Eraserhead, was released a decade later in 1977.

Lynch and I discussed storytelling, consciousness, Transcendental Meditation, his initial infatuation with becoming a painter, and how a chain reaction in a painting studio from early life first led him from the canvas to celluloid. This conversation is in anticipation of his first New York gallery exhibition since 2012, which will open on November 1 at Sperone Westwater. Encompassing paintings and works on paper as well as built environments, furniture, and lamps, it will be a moment that evinces the full spectrum fluidity of Lynch’s creative output.

Hans Ulrich Obrist: When I entered SelgasCano’s pavilion this afternoon, I immediately thought how incredible it is to bring such modern and playful structure to such an iconic setting at the intersection of arts and science, right between LACMA and the La Brea Tar Pits. The Pavilion looks so different here from London and that obviously has to do with this magical light in L.A. You told me earlier today that this special light during your first morning in Los Angeles thrilled your soul.

David Lynch: We’re very lucky to have this beautiful light. It’s kind of a healing light. It gives us a feeling that we can do anything. I came out to Los Angeles in 1970 from Philadelphia. I arrived at sunset in San Vicente and stayed the night in an apartment. The next morning, I woke up and went outside and I couldn’t believe what I saw: this Los Angeles light. I was looking up at it and I just got the greatest feeling. As I was telling you I almost got hit by a car, because I wandered into San Vicente looking up in the air.

We’re surrounded here by marvelous trees. We both love trees. As Agnes Varda told me, a day without seeing a tree is a wasted day.

I planted 500 trees with my dad one time.

Where did you plant them?

Idaho City, Idaho. Idaho City used to be the capital of Idaho, before Boise became the capital. And my father ran the Boise National Experimental Forest. I was in the Boy Scouts, and we all went up and planted 500 trees one weekend. Near Idaho City. My father was a research scientist for the Department of Agriculture and loved trees. I always said, ‘If you cut my father’s leash, he would go right into the woods.’ His favorite tree was the Ponderosa Pine. Now I hear that millions of trees are dying every year, among them are Ponderosa Pines here in Los Angeles. It’s a very, very sad thing. A species of bark beetle, which apparently because of the rise in temperature, doesn’t go dormant any more in the winter, and it’s killing all these trees. Trees are so precious to us, as you know. Hopefully we’ll get ourselves together and save them.

When I visited you in May, we talked a lot about extinction and how it’s more urgent today than ever to find positivity.

There’s a consciousness underlying everything that has qualities, all positive. It’s a field of unbounded intelligence, unbounded love, unbounded happiness, unbounded creativity, unbounded energy, unbounded power, unbounded peace. The side effect of expanding that consciousness and all those positive qualities is that negativity starts to recede. People begin to see that things like traumatic stress, anxiety, tension, hate, anger, fear, and depression automatically start to dissipate. To lift away. It’s the most beautiful thing for the human being.

That’s especially interesting in the context of the Information Age. Has the Internet changed the way you work?

That fluidity of practice is something you have always embraced. How do you move from an idea to the medium?

Every medium has its own language. When you begin working with it, it speaks: ‘This is how I am. This is how I work. This is what comes out when you do this and this and this.’ You develop a dialogue with the medium, and then in that dialogue, ideas start coming to work in that medium and away you go.

You once had an epiphany when you were a student. What happened?

I used to only want to be a painter. That was it for me. I ended up at the Pennsylvania Academy of the Fine Arts and I was in this little cubicle in our big shared studio one night around ten o’clock. I was painting a three-foot square of a garden at night. It was mostly black with some green coming out. I sat back—probably to take a smoke—and I looked at the painting. I heard this wind coming from the painting and the green started to move. I said, ‘Oh, a moving painting,’ and that led me to cinema.

I once asked you what was your most spiritual movie. You didn’t hesitate a second and you said Eraserhead, because it was growing.

Eraserhead for me is my most spiritual film. When I work, I go by ideas. I say, ideas are everything. We don’t do anything as human beings without ideas. I started getting ideas and out came Eraserhead. Ideas came and I knew, I felt, I loved the ideas. I didn’t know exactly what they meant but what’s important, when you make a film, is knowing what the meaning is for yourself.

Do you consider smoking a form of meditation?

Smoking is not a form of meditation. Smoking to me though is beautiful. I grew up when doctors were telling us on TV how great cigarettes were. When I was little, I didn’t think grownups could be painters. I was in the ninth grade and in the front yard at my girlfriend’s house when I met a kid from another school who happened to say that his father was a painter. I thought maybe a house painter, and he said, no, a fine art painter. A bomb went off in my head and that’s all I wanted to do from that moment on. He took me to his father’s studio. I was already smoking at that point, but his father smoked as well, and he made incredible, strong coffee. I started equating smoking and coffee to the art life—they became integral. Looking at a painting, stepping back, taking a smoke, looking at it, getting the next idea to go. It was so beautiful, this coffee and smoking. The ideas just flowed.

Zaha Hadid, who designed an extension to the Serpentine Pavilion and was also a trustee of the Serpentine for more than 20 years, always told me that there should be no end to the flow of experimentation. When I asked you some years ago to name your most experimental film, you told me that it was The Straight Story.

I love experimenting and experimenting to me is finding solutions to problems. The Straight Story is a straight story. There’s no playing with time or space. It starts one place and goes down along a highway to the goal. It’s a tricky business to get emotion to come out of the screen and into your heart, and with few elements going, each one becomes critical to bringing it out. So The Straight Story involved a lot of experimenting: how a sound comes in, how it grows when it comes in, how it travels loud and soft and then goes and then maybe swells up and then goes away. All those little differences became crucial.

You have said there’s a great freedom in the sense that a story can be told continuously.

I love a continuing story and I love the freedom that television has brought. I feel sad that the feature film is running into trouble. Art house and alternative cinema don’t get a big screen very often, and if they do, they get it for a short time. I love cinema that is built for the big screen, great big sound, great big picture, but it’s not really happening right now. So, the next best thing is television, the freedom to make what you really believe in and make, if you want, a continuing story.

I don’t know where everything is going, but I do know that every human being has the potential for infinite consciousness. It just needs unfolding. 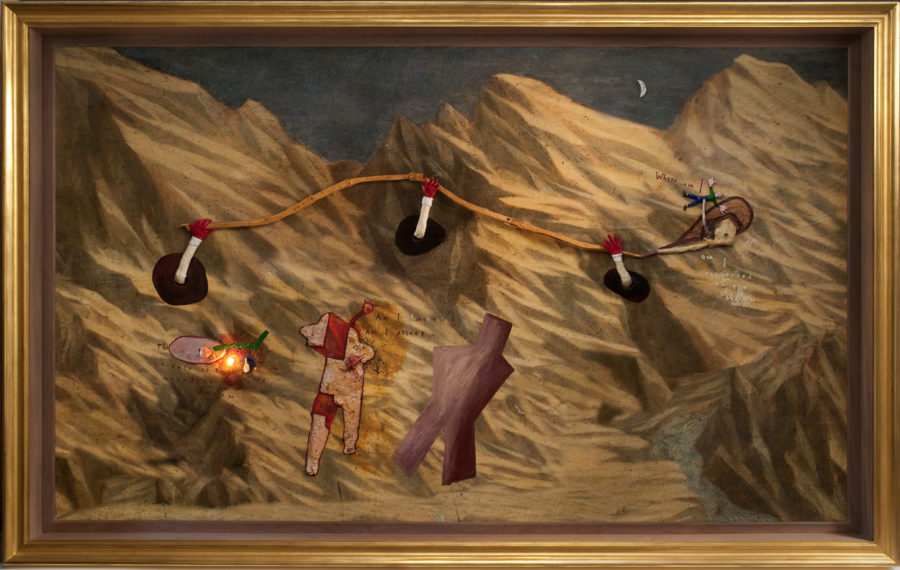 6
A Collection of Paintings by David Lynch
…