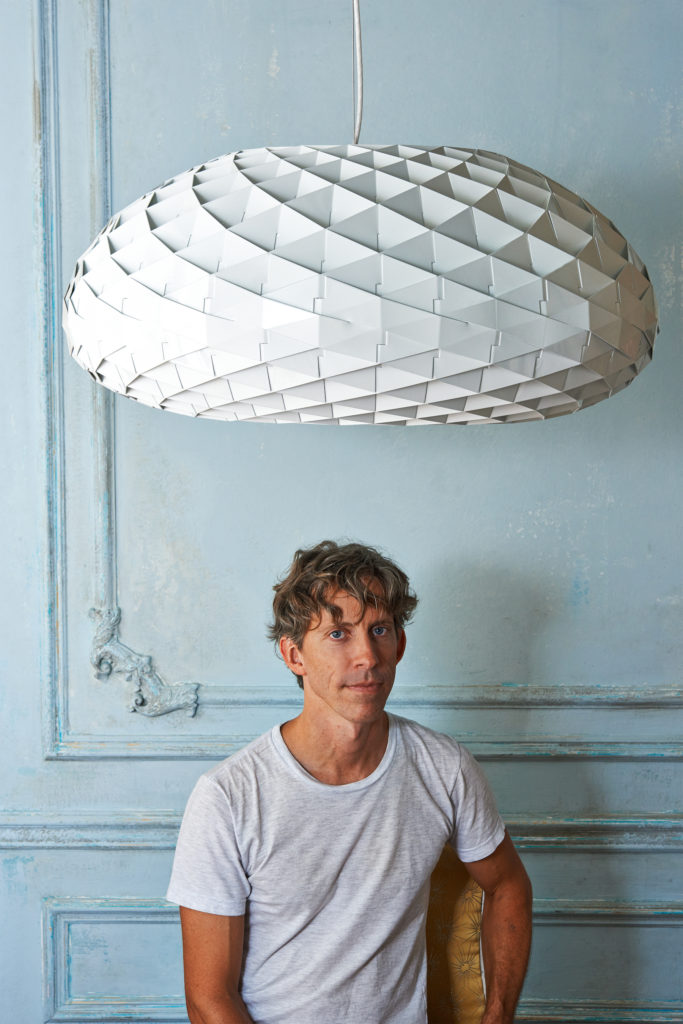 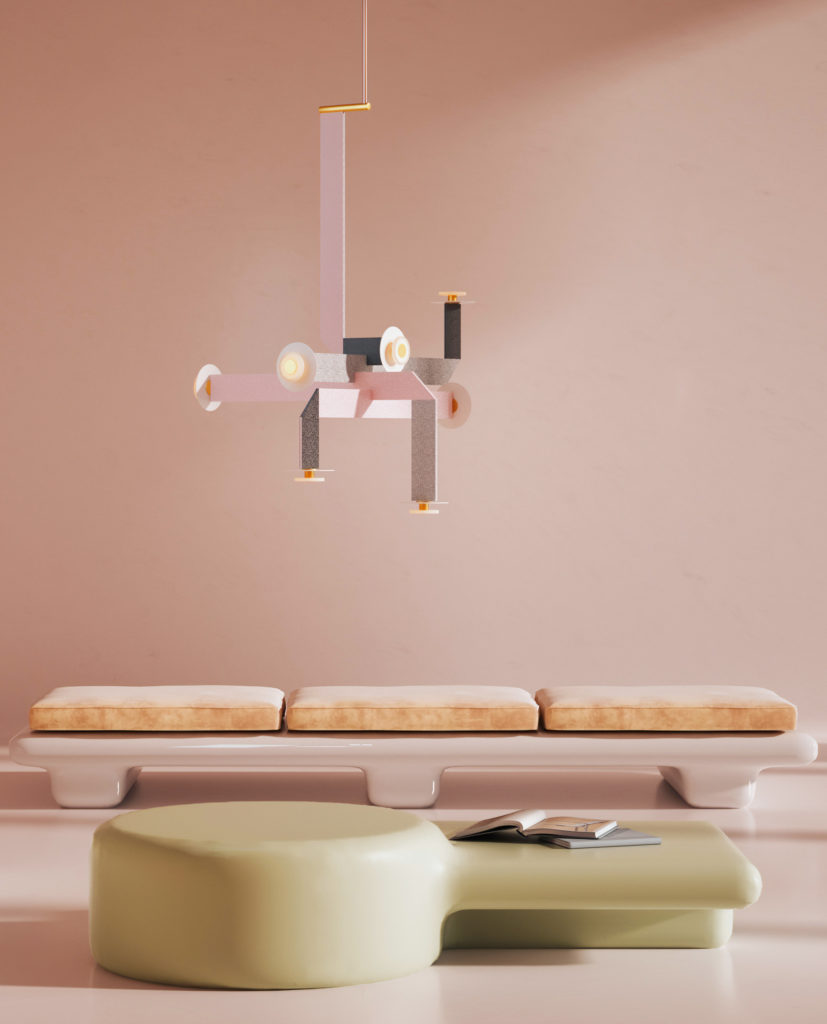 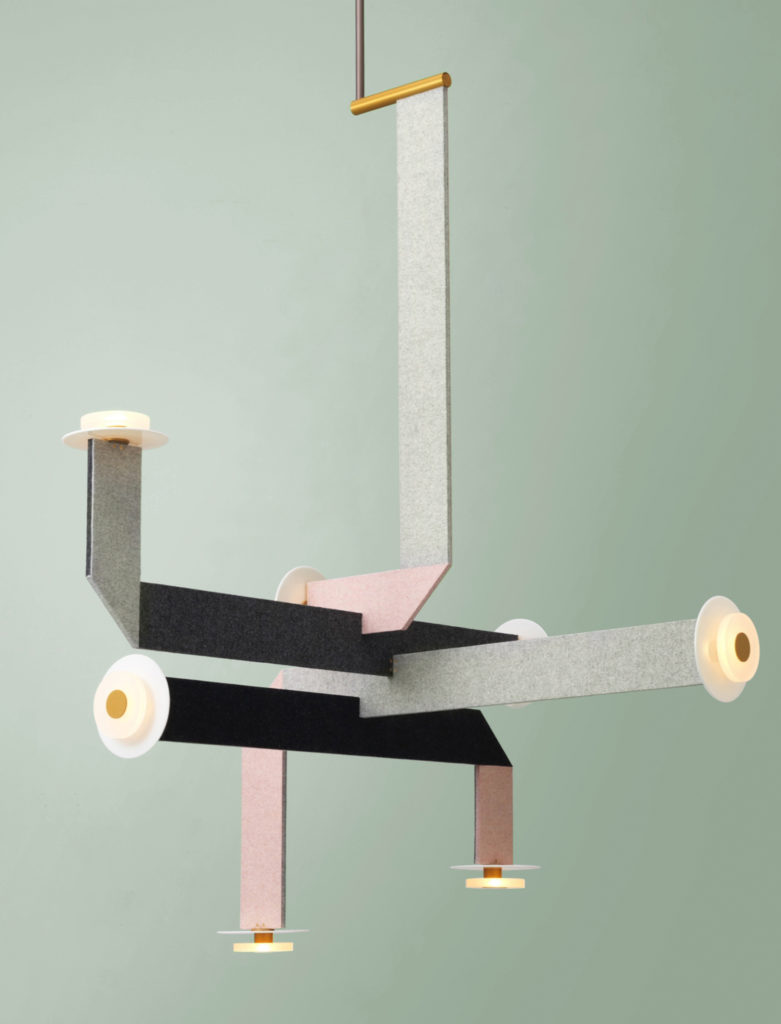 Cross chandelier …
DESIGNER OF THE DAY

Designer of the Day: James Dieter

Describe what you make: I make light fixtures. I think of them as sculptural in nature, using a vernacular that’s developed through experimentation and invention, resulting in something beautiful. The collection is all technically unique, with proprietary connections and pretty much all parts made in-house. The fixtures range from sconce form to chandeliers, including pendants and hanging tower configurations.

The most important thing you’ve designed to date: My first lighting fixture after deciding to rebrand from my original lighting company, which was dform. That brand is made of textural patterned laser-cut wood veneer as light fixtures and screens. Moving away from wood, pina was the transitional design from dform to “James Dieter,” and represented a material departure but a structural familiarity. While this form had potential, I really wanted to go further and began working on a series of tetrahedron-based designs. The first of these was mobi. Maybe that’s the most emphatic shift—maybe it’s the most important. Mobi brough my ideas toward the tetrahedron form and chain structure, which many of the designs have somehow iterated from.

Describe the problem your work solves: I think about this all the time and can only conclude that I’m creating problems rather than solving them. Or rather, creating puzzles in order to solve them. I enjoy the kinds of technical challenges that I create from abstract or visual ideas, and the need to find a way of bringing them into production. The work may fit into a designer’s composition of an interior, but my own interest is more in the process of invention, of finding a visual idea that’s interesting to me and that, in order to execute it, begins a series of questions. The vision and the design decisions—my responses to those questions—mutually change each other. Making something that’s interesting as an object and a system, hopefully with the ability to surprise visually, is the goal. And these technical stumbling blocks are what make it interesting. Of course this process doesn’t solve any real problems for anyone and I recognize it’s a privilege to be able to chase dreams. I think of the phrase “useless beauty,” if one’s willing to accept the beauty part.

Describe the project you are working on now: There’s a current project with the metal fixture I look forward to seeing finished. It’s an installation for a stairwell that spans three floors and spreads across three walls. It’s the best possible installation I could ask for with the fixture, where its unusual geometry can really define the space. A single one is interesting, but seeing them arranged in groups, triplets, is really satisfying and I’m very happy to have the opportunity.

A new or forthcoming project we should know about: In the studio, the next thing that I’m interested in doing is more work with porcelain. I incorporated it into designs a season ago and hand-make the parts on-site. I’ll be doing more with the porcelain, making a range of pieces that will be used in multiples—some conical, some flat. I’m currently exploring those now and learning a lot about what will work. I expect to introduce some new work toward the end of the year.

This season in particular, we’re really proud of guston, which just received an NYCxDESIGN award for best lighting in the chandelier category. And just a couple weeks ago, we launched two pieces with Sight Unseen for their Offsite Online digital exhibition. I was happy to see their promotion put on pause in an effort to listen and give space to Black Lives Matter content. This is our first year showing with them and I feel good about it—I want to be aligned with other design entities and institutions that are focused, if even for the first time, on this sort of awareness. Actually, I’m conscious of my inclusion in this Designer of the Day series without it being alongside many designers of color. Should someone else perhaps be here? I pose that as a challenge to both of us.

What you absolutely must have in your studio: Periods of relative quiet. Colleagues nearby who will critique. Also a cashew and Spanish corn nut mix I’m always running out of.

What you do when you’re not working: My preferred recreation is swimming, but that’s out of the picture right now as pools are all closed because of the pandemic. These days, I wander around a fairly small patch, just observing what the city is like and how its spirit has changed, or is coping. In reality, I spend most of my time at work, or at least in the studio. I may not be getting much done, but that’s where I am.

Sources of creative envy: Ronan Bouroullec, whose work I see regularly on Instagram, and also the exuberantly prolific Jaime Hayon. The sensibility of Rei Kawakubo’s approach to form I find to be genius. Kinetic sculptors Jean Tinguely and Arthur Ganson. Richard Diebenkorn was another big influence. I spent years frustrated by my inability to be Richard Diebenkorn.

The distraction you want to eliminate: Streaming video is one but attempts have so far not succeeded. And there’s no good segue but joking aside, the current occupant of the White House is a distraction I pray will be removed in November. We’re facing so many problems that are compounded by incompetence. I’d also say right now, it’s clear that a certain part of the population—the white part that includes myself—hold a lot of inherent biases that need to be examined and addressed. I’m moved by the state of the country and sincerely hope that strides will be made toward equality. That desire along with so many other concerns, the environment particularly, are endangered or hindered by bad governance. But on the hopeful side, this distraction from a chance at saving our future can be changed by voting in November.

Remember or forget? I’m most prone to forgetting, but not happy about it.

Aliens or ghosts? The Netflix algorithm would say aliens.