BY DAN DURAY
PRODUCED BY SURFACE STUDIOS IN PARTNERSHIP WITH JDS DEVELOPMENT GROUP May 23, 2017
Share
Back

L’Academie Française is the institution that controls the extent to which foreign words and phrases may enter the French language. Courrier electronique, for example, is the phrase they say you must use instead of “email,” because that is too anglais. But one they haven’t been able to keep out of common usage in recent years is the adjective “Brooklyn” (pronounced “bru-kleen“) a new byword for quietly, elegantly hip.

Such sensibility could describe Baltic, a new 11-story, 44-unit residential building in the Park Slope neighborhood of Brooklyn that brings an almost European level of comfort and style to the neighborhood’s Victorian feel and homey character. The latest project from JDS Development Group, it’s located at 613 Baltic Street, a stone’s throw from such famed hot spots as the Barclays Center; the Park Slope Co-Op; and, of course, Prospect Park, landscape architect Frederick Law Olmsted’s magnum opus, which he vastly preferred to his own Central Park, in Manhattan.

Baltic offers luxury condos that seek to move Brooklyn past the brownstone. Its principal architect, Brian McFarland of VOA Architecture (now Stantec), says the building’s long Roman bricks were chosen for the way their visible grain would interact with the ubiquitous reddish-brown sandstone that has become a hallmark of Brooklyn.

“It’s continuing an interesting conversation,” he says of the building. “Architecturally Brooklyn was stuck in time for a long time, from the early ’50s on. We thought about where it left off and how we can pick up from there.”

Brooklyn’s classic brownstones weren’t built with many amenities (or even really built to last), meaning that defectors from Manhattan had to sacrifice convenience and comfort for space and quiet. At Baltic, however, the emphasis is on time-honored, superior materials. The building is replete with granite, quartz, labradorite, and rich oaks—materials people trust because they’ve seen them countless times before. 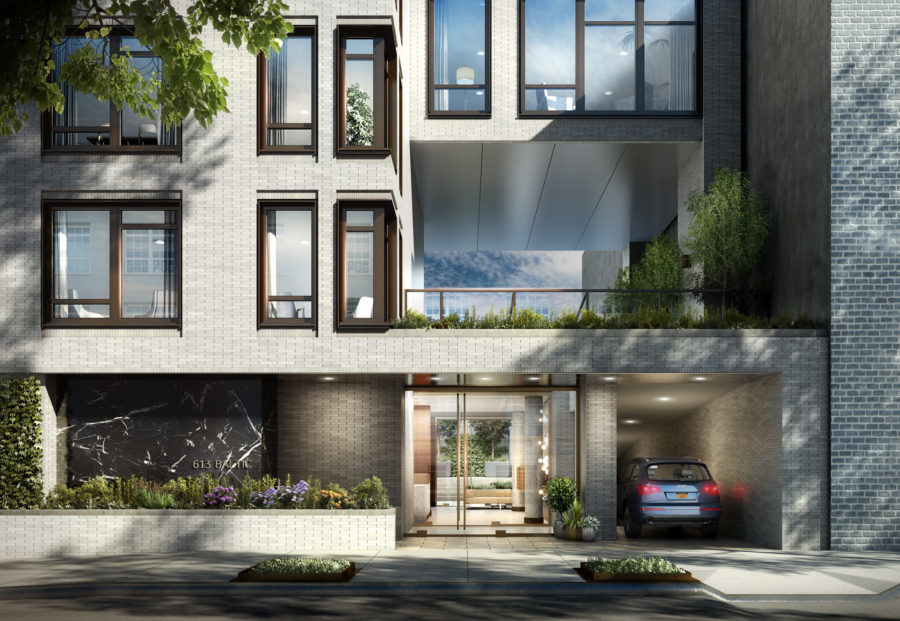 The idea is also to upgrade the classic Brooklyn experience. Most associate the sprawling borough with casual hipster fashions, communal organic farming, and a bold, burgeoning arts scene. Baltic’s ceilings stand at 10 feet in some units, and a conscious effort has been made to reflect the best of the neighborhood. The ground floor features a two-level, landscaped garden and terrace designed, like the building’s many green spaces, by Harrison Green, known for his work at the 1 Hotel Brooklyn Bridge (and, soon, New York’s Museum of Modern Art). Some units feature private outdoor areas, but all residents are welcome on the roof, perfect for grilling and film screenings.

Amenities such as parking, a 24-hour doorman and workout room can’t be found in many buildings in Brooklyn. The interior fixtures, too, are bespoke on a level that is rare in the quietest borough. These were designed all in American black walnut and Cristallo gold quartz by the people at Brookmans, a British furniture firm marking its U.S. debut at Baltic with kitchens that feel like an extension of the apartment, rather than a modular element slotted in.

“We’ve hand-selected veneers for each of the kitchens in that building,” says Hugh Owens, Director of International Design at Canburg Group, the parent company of Brookmans and Smallbone of Devizes. “Technically, for that reason, no two kitchens in the building are the same.”

This, in a way, reflects the overarching goal of Baltic: moving Brooklyn—both the noun in English and the adjective in French—past the brownstone with custom design that speaks with a new voice.