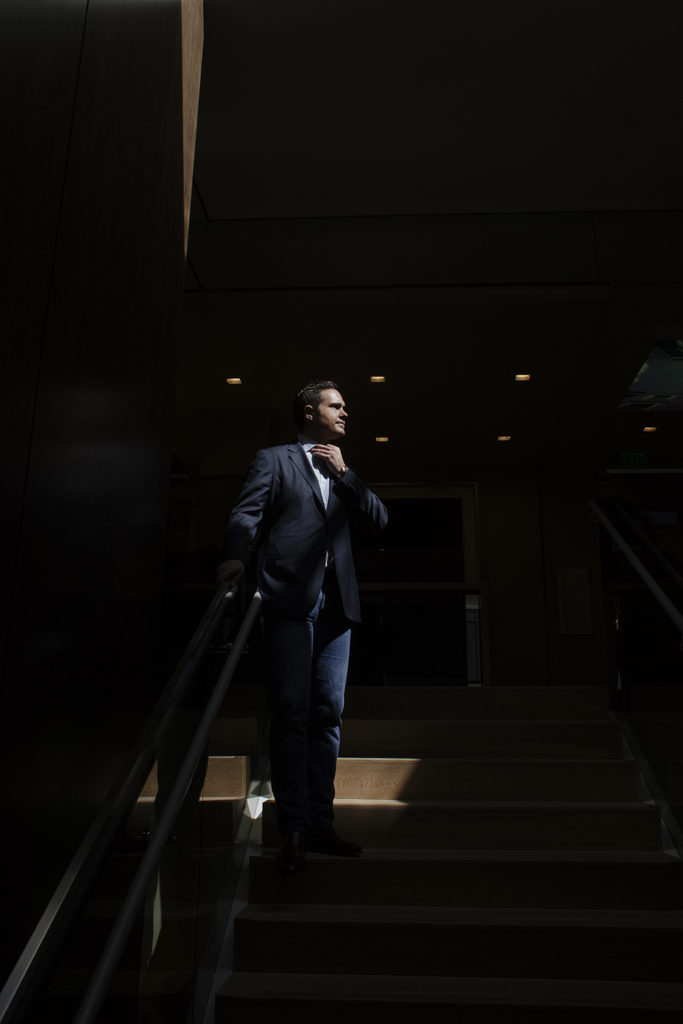 Are you a Kanye West fan?

Did you know he’s on the cover of this issue?

I did not know that. It makes sense, though. He’s an icon.

Wasn’t he a client of United Talent Agency, where you’re currently the head of fine arts?

Yeah, we don’t represent him anymore. He’s at Creative Artists Agency now. He moved back about six months ago.

Sorry for your loss.

I know every word to every song on his first album. If you want, I can start rapping for you right now.

No, thank you. I read a headline on Vulture that referenced the HBO show Entourage calling you the “Ari Gold of the art world.” Is that an accurate assessment?

No, I don’t think so. I remember the character was sort of this crude archetypical reference to people who do our job. I mean, there are certainly people like that in the industry, but I come from a classical background as a lawyer, and people don’t act like that at law firms.

It’s a bit like being called an awful human being.

That’s right. I guess I’m not an awful human being by any stretch. I really like people. I want to help them. This is a job where you can really have a positive impact on people’s lives. I know that sounds really corny.

Only a little. Can you explain what it is you do?

My division represents individuals that characterize themselves as visual artists. Our decision to do this at UTA is borne out of the fact that I come from a background where I represented great artists as a business advisor and lawyer. I was in it with them, looking at the bigger-picture strategy—investment in a piece of real estate, putting them together with tax advisors, helping with overall gallery relationships.

What about at UTA?

Well, I did this job for a while, developing a reputation for myself as a person who works with a lot of great artists. I had met the people at UTA and got to know them over the course of a year. We started to talk about what it would look like to have this advisory for artists in the realm of a talent agency. To help artists determine what career decisions they should make. Everything from doing movies to television to books. Ai Weiwei is a client, and we’re currently working on a movie project for him.

As a lawyer, before you came to UTA, who were some artists you represented?

Urs Fischer was a client. There were dozens and dozens of them.

And who are some artists your division at UTA represents?

A number of very well-known international artists. Saying names for the sake of saying names is something I’m not particularly comfortable with, though. When you represent somebody it’s a very personal endeavor.

Was leaving a law practice and joining the agency an easy transition?

Yes and no. I would say yes in that you’re a representative of someone and you’re their advocate and it’s your job to be thinking critically about decisions that your client faces. It took a little bit of learning and effort to really understand the concepts I explained earlier. What I did for the first couple of months was sit in on our department meetings and figure out what people do. Then you start to find out who the right people are for the right projects.

Do you have a personal philosophy that guides you?

In the end, the work will speak for itself.

Nice one. Your wife also became an art world big-shot via a successful legal practice. She was a deputy attorney general and is now a managing director at Christie’s. Do you ever compare notes?

We live in the art world. We’re friends with artists and collectors. A lot of our life is part of that world, and we’ve been together for more than 15 years, but we keep our professions completely separate. We talk about our two daughters more than anything else.

In September, UTA opened an exhibition space in Los Angeles. How has the reception been from the art community?

Overwhelmingly positive. We now have this beautiful piece of architecture in Downtown L.A. where we can program a show like the Larry Clark exhibition we opened with, but it can also be a place to put on a one-act play for one of our playwrights, or a reading for one of our authors. We’ve gone out and invested in a place where our clients can be creative.

Has the art community been a problem for you at all? It can be critical of people perceived as suits, no?

People have only been positive to me. But maybe that’s just a function of how they act in person. I try not to think about negative reactions when people might be expressing their personal agenda.

So you’ve found harmony for UTA in that world?

We work with a lot of really interesting voices. Lena Dunham, for instance. Her point of view is so special it could only be created by her. Same with the Coen Brothers and Jill Soloway. Harmony—I’m not sure. But we’ve found a lot of great people who want to work with us.

And as for Kanye, do you have a message for him that we can relay?