As the Opus prepares to open, we're afforded another look at the greatness and vision of the late Pritzker Prize-winning architect.

Though she passed three years ago, Pritzker Prize–winning architect Zaha Hadid still has new delights to offer. One need only look to the massive glass torus that is the soon-to-be-complete Opus mixed-use building in Dubai to see that.

While we may never know whether the late architect was preoccupied with feng shui upon conceiving it, or whether she simply wanted everyone to have a great view, the building’s outstanding feature is a central gap that calls to mind the so-called “dragon gates” seen in many Hong Kong high-rises. In a design feat that reminds us why she was known as the “Queen of the Curve,” Hadid contracted the central void on its two sides, pushing glass panels forward in a convex fashion, offering those who stand by its periphery an unimpeded view of the outside world and of the Opus’s exterior.

“[The design] expresses a sculptural sensibility that reinvents the balance between solid and void, opaque and transparent, interior and exterior,” says Mahdi Amjad, CEO of Omniyat, the development company behind the Opus, which will feature 12 restaurants, a rooftop bar, office space, and the ME by Meliá hotel. At the 2014 London Design Festival, Hadid revealed that the interior features sculptural elements as well, expressed through balconies, angular beds, and waves of dangling glass balls in the lobby.

Located minutes away from the world’s tallest building, the Burj Khalifa, the Opus is the only building in Dubai whose interior and exterior were both designed by the late architect. The two-tower structure is joined by a four-story atrium at ground level and an asymmetric skybridge—elevated by 71 meters, 38 meters wide, and four stories high—at the top, which centers a void that is at least eight stories high and looks as if it was “carved” right out of the cubic complex. With 20 stories above ground and seven underground, the Opus also features that exciting juxtaposition between corners and curves, a trademark of Hadid and her associates at Zaha Hadid Architects (ZHA).

“You always expect to be surprised by ZHA’s designs, but the Opus… goes beyond what we could ever have anticipated,” says Gabriel Escarrer, Vice Chairman and CEO of Meliá Hotels International. The ME by Meliá is currently fitting out its interior and is scheduled to open next year. 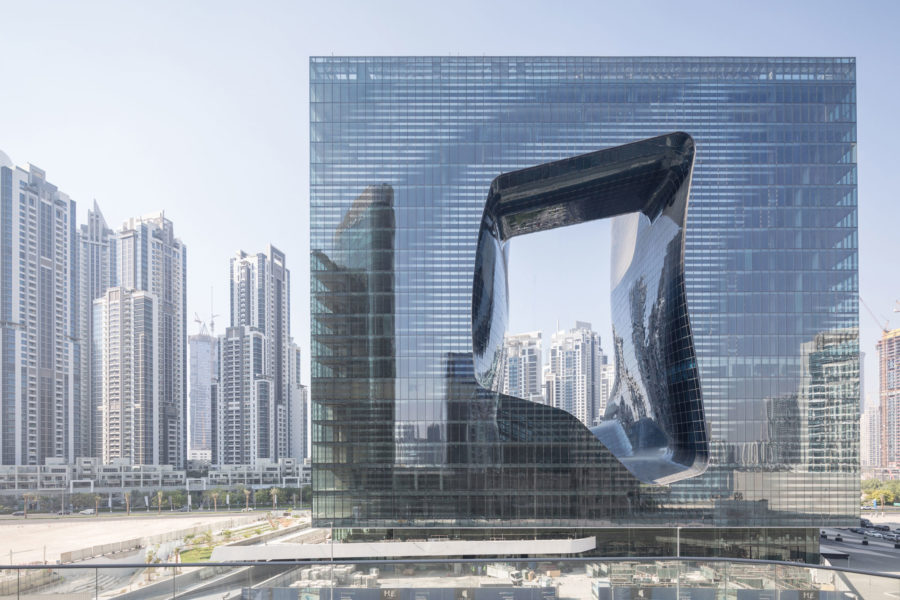 Jins Moves Into a Trapezoidal New Shop in Japan, and...

Modsy Shuts Down Without a Trace, and Other News

Maldives Plans to Build a Floating Island City, and...

John Pawson Can Even Make Bedding Sculptural, and...