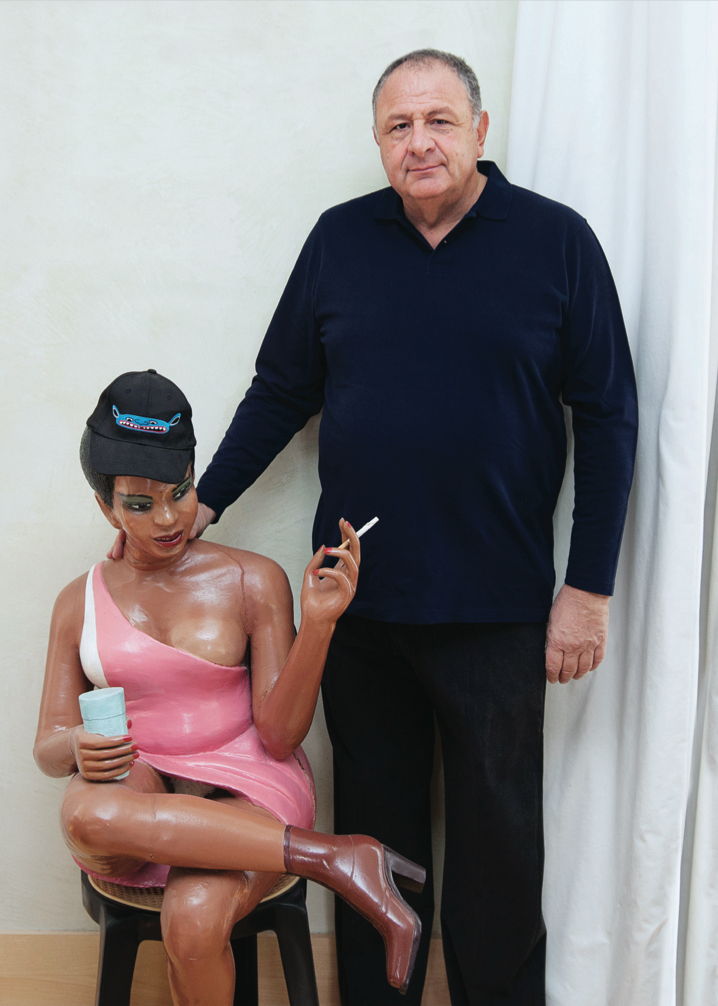 Even though he has never been there, Jean Pigozzi is one of the world’s preeminent collectors of art from the continent.

By NATASHA EDWARDS
Portrait By ALAIN DELORME November 30, 2015
Share
Back

Even though he has never been there, Jean Pigozzi is one of the world’s preeminent collectors of art from the continent.

We’re sitting on a huge, squashy green leather sofa on the second floor of an historic building in the St-Germain-des-Prés area of Paris, amid a scattering of artworks—a small painting, “Memorial for Zaire,” by Cheri Samba, as well as a cluster of colored drawings by Frédéric Bruly Bouabré, and figure sculptures by John Goba that combine painted wood and porcupine spines.

There’s also a big teddy bear. “It’s called Christian,” says Pigozzi, who named it after the man who gave it to him: his friend, the shoe designer Christian Louboutin. It’s also a reminder that in addition to being a major collector of African contemporary art, Pigozzi is also a socialite.

A book of his photographs is shortly to be published, focusing on the swimming pool at Villa Dorane. “It’s 60 years of this pool, which was built in 1953,” he says. “It’s like a book done in one room.”

So how did the scion of the Simca automaker fortune begin collecting African art? He started buying lesser works by known artists while attending college in the U.S. It was in 1989, after he visited an exhibit of works by African artists like Bodys Isek Kingelez and Chéri Samba at the Centre Georges Pompidou in Paris, that a real passion began to form. “I was completely mesmerized,” he says. “For me, it changed what was art.”

He began working with one of the exhibit’s curators, André Magnin, to assemble the largest private collection of African art in the world—though it’s not the size that matters, he says, but the quality. He still believes in collecting in numbers, however. “For the African collection, 90 percent of the works we buy directly from the artists,” he says. And despite his enthusiasm for African art, he has to this day never visited the continent, nor does he have plans to do so.

Pigozzi’s eye has also started to wander eastward, to Japan’s contemporary art scene, which perhaps speaks of his impulse to step further into the unknown. This growing portfolio is exceedingly slanted toward young artists. “Nearly every artist is born since 1985,” he says. “And nearly 40 percent are women.”

According to Pigozzi, the Japanese appeal is in how they belie oddness with perfection. “They’re perfectionists,” he says. “But behind it, there is some very weird stuff going on.”

Museums and private collectors build collections differently, Pigozzi says. “Sometimes I wake up in the middle of the night and think, I must have that work. The Pompidou or Tate can’t make a decision alone; for me, the greatest collections are made by individual people.”

In a life spent hopping between Paris, London, New York, Geneva, and Panama, he says he always lives with bits of his collection. He exhibits all the works he owns on his website and lends pieces out to myriad exhibitions every year. Will he ever open his own museum? Pigozzi neither confirms nor denies any plans. It’s very likely, though, that if it does happen, it won’t be in Africa.