The Turkish architect thrives in creating galleries and spaces for artists.

Upon arriving in New York City 12 years ago, Turkish-born architect Koray Duman instantly befriended a group of artists. “We’ve grown up together in this city,” he says. “When we all first started, I’d help them install work in their fair booths. Now many of them have moved on to opening their own galleries.”

With spaces for On Stellar Rays and CRG gallery under this belt, along with two completed projects for painter and photographer Richard Prince—a four-story Harlem studio building and a storage barn on the artist’s upstate property—Duman has quickly become a go-to architect for young and established artists and gallerists. Last month, he completed his latest project, the New York home for London’s Seventeen Gallery, on the Lower East Side.

In the city’s creative circles, Duman is well known for the dinner parties he throws in his apartment, where he brings together a healthy mix of designers, architects, artists, and curators. They come for a home-cooked meal around a table too large to have group conversations, encouraging them to turn to their immediate neighbors for more intimate discussions. Duman’s apartment, a corner loft filled with art and custom-designed furniture pieces, embodies much of his work, which doesn’t rely on bold forms and luxurious materials to make its mark. Instead, it slyly shapes behavior, perception, and experience through subtle and understated interventions.

Duman’s mindset and practice is a global one. After graduating from Middle Eastern Technical University in Ankara, Turkey, he continued his schooling at UCLA, then spent six years of working in the office of Frederick Fisher in Los Angeles. Upon moving to New York, Duman partnered with Laith Sayigh to form Sayigh Duman Architects, which transitioned into Büro Koray Duman in 2013.

Duman’s portfolio includes work Diane von Furstenberg and Design Within Reach, for which he designed several retail stores, including its 57th Street Manhattan flagship. More recently, the work of his seven-person team has shifted to arts-related projects. It’s here that he appears to be finding his truest voice.

While seemingly simple, his gallery spaces are not clean white boxes. A recently completed gallery for On Stellar Rays, for example, is made up of floating walls that don’t touch the ground, ceiling, or each other to provide a sense of lightness and flow of space. The reception desk and shelves hanging above are stainless steel, which seems to dissolve into nothingness when the light hits it just right. These subtle details change the experience of the space entirely, and they are a unifying thread throughout Duman’s work.

His design for Seventeen Gallery preserves key elements of what was previously a furniture manufacturer and supplier storefront, while material-focused insertions strike a careful balance between blank space and expressive intervention. Inside the front window, a full-height cork wall serves as a backdrop to the storefront display. At night, the wall slides behind the front door, functioning as a security gate and allowing long views into the space. A repositioning of the gallery’s office space, also lined in cork, toward the front of the gallery means visitors have to walk past a series of desks before reaching the main gallery in the back. The inverted configuration puts social interaction first. Together with the use of cork, a material not usually associated with a gallery space, the design for Seventeen moves to close the distance between viewer and gallery, and encourages a sense of community. 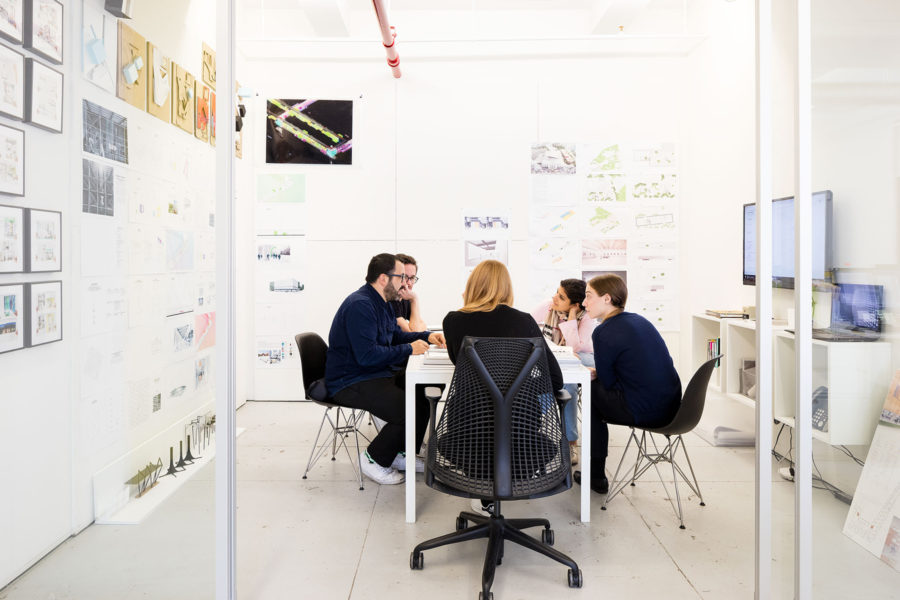 Ask Duman what is most important in designing spaces for art, and he’ll describe a series of intangible sensibilities. “The space needs to have an aura to it,” he says. It’s a frustrating answer when trying to lay a finger on exactly what it is that makes his gallery designs different. The answer, however, may lie not in the completed spaces, but in his design process, an approach led by establishing a careful understanding of each space, working with the gallery to establish what is the most effective, functional, and valuable outcome, and most importantly—as is especially evident with Seventeen Gallery—identifying which existing features of a space can be retained. Duman treats galleries not as blank canvases to be filled with artworks, but rather as adaptive re-use projects that create a dialogue with the work to be shown. His spaces have character—sometimes personable, other times aiming to be disruptive. The result is an intensity of small moments, in which materials, details, and lighting come together just right. “Architecture,” he says, “has the power to help us question our environment, for it to be more than a background.”