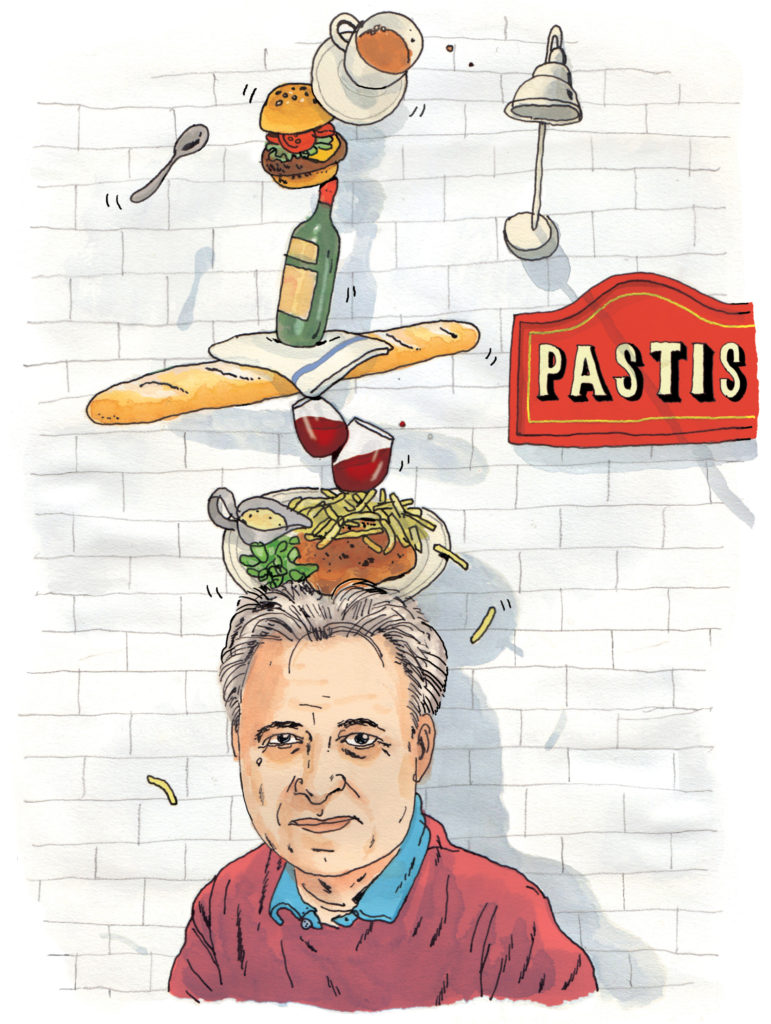 One writer considers the New York of Keith McNally as the restaurateur moves to resuscitate a defunct hot spot.

By Stephen Heyman
Illustration by Victor Kerlow March 20, 2017
Share
Back

One writer considers the New York of Keith McNally as the restaurateur moves to resuscitate a defunct hot spot.

As much as he might regret it, Keith McNally has a gift for destroying New York City neighborhoods. What Robert Moses needed highways and bulldozers to do, McNally can accomplish with one well-lit brasserie. In 1980, he introduced New Yorkers to Tribeca with his first restaurant, the Odeon. In the ’90s, he built Balthazar, which established SoHo as a “destination.” In the early 2000s, he opened Schiller’s Liquor Bar, which heralded the hipster apocalypse of the Lower East Side. The durable appeal of his restaurants—and the knack he has for setting them in as-yet-underexploited slices of the city—led The New York Times, in an uncharacteristic fit of hyperbole, to brand McNally as “the restaurateur who invented downtown.”

McNally always claims that his next restaurant will be his last, and yet he keeps building new ones. His 14th, Augustine, a swish brasserie in the Financial District, opened late last year. A former child actor and occasional filmmaker, McNally, 65, has a moody, artistic temperament and tends to come off in interviews as charmingly tortured about the ethical and aesthetic implications of his ever-expanding empire. In recent years, that veneer of self-doubt has turned into something darker—genuine ambivalence, maybe even regret. He has said, in The Times and on Eater, that he’s “sick of restaurants,” that high rents in New York “suck the life out of the city,” and that despite—or maybe because of—his myriad successes, he often feels “fraudulent.” (McNally declined to be interviewed for this article.)

McNally will soon resurrect one of his most iconic restaurants, Pastis, the glittery French canteen whose popularity among celebrities and scenesters unleashed such a huge tidal wave of development in the Meatpacking District that it eventually took the restaurant down with it. After Pastis shuttered in 2014, its building was demolished to make way for a Restoration Hardware. That year, McNally told The Villager that, “If Pastis was something of a catalyst for the changes in the Meatpacking District, then I should be ashamed of myself. I can’t bear most of the changes there. The area has become ugly and excruciatingly one-dimensional.”

Details about the new Pastis are still sketchy. McNally’s handlers could not indicate whether it will open this season or even this year. In earlier interviews, McNally has been characteristically ambivalent about the deal, saying he signed the lease but there’s something about the project that he’s “embarrassed by.” The hesitation is perhaps understandable. McNally, whose career seems to be all about finding the next trendy neighborhood, is returning to one that by now combines all the charms of a monumental tourist plaza and a soul-crushing shopping mall. Maybe he’s asking himself if New York really needs an ersatz version of an ersatz bar-tabac whose successful recipe has already been revived and revised and remixed by a slew of copycat restaurateurs, not to mention Mr. McNally himself?

“Look, if anyone could pull this off, it’s probably Keith. He’s a monster. Everything he does just works. I don’t think he’s ever had a real failure,” says Paul Sevigny, the DJ turned nightclub owner who cited Pastis and other McNally restaurants as inspirations for many of his own ventures (from the Beatrice Inn to his new SoHo boîte, Paul’s Casablanca). “But personally, I’d be terrified to redo any of my old places. You’re setting yourself up for disappointment. It will never be the same. It’s never going to be what it was to the people who enjoyed it.”

Perhaps no part of New York has been so radically transformed by a McNally joint as the Meatpacking District. In 1999, on an expanse of paving stones that was also a five-way intersection prowled at night by transvestite hookers, he pictured, in his inimitable way, a European piazza with a trickling fountain. Modeled on a French workers’ café, Pastis drew on the surrounding fumes of authenticity—the blood-splattered meat factories, busy loading docks, and smelly trucks, which all reminded McNally of the Victorian-era butcher shops in London’s Smithfield market, where he worked as a young man.

In terms of design, the restaurant tried hard to stress its ouvrier bona fides. The ceiling was made of pressed tin, “nicotined” with ocher pigment and decorator’s glaze to make it look like it had been there forever. The pewter bar was distressed, the mirrors were antiqued, the wooden floors were rough-hewn. The restaurant sold cigarettes. Its wineglasses were stemless. Its menu was full of uncomplicated French staples like chicken paillard and steak frites. Some of this may sound familiar today, now that the city is replete with unfussy French food served in salvage-chic mess halls, but at the time it felt inspired.

“Before Keith, no one was using subway tiles. No one was using those bistro towels as napkins or the little durable juice glasses for wine,” Adam Rapoport, the editor of Bon Appétit, told New York magazine just before Pastis closed. “There are so many things like that that are common now that we forget who started them and where.”

The clientele, of course, was hardly composed of meatpackers and streetwalkers. Mick Jagger, David Bowie, and Beyoncé and Jay Z were apparently regulars. Liv Tyler got married at Pastis. Sarah Jessica Parker hosted her baby shower there. One night, Cyndi Lauper threw an impromptu dance party. Staff meetings were routinely called about VIP problems, like what to do if the teenage Lindsay Lohan tried to order alcohol. (“Card her,” the management said.)

“I had a very long lunch with Linda Evangelista there in 2002,” John Demsey, the president of Estée Lauder, told the New York Post. “At that time she wouldn’t get out of bed for less than $10,000, but she would for a plate of Pastis french fries.” Even among the jaded New York glitterati, Pastis seemed to evince an unusual quantity of bonhomie. “God, how I enjoyed it,” Joan Juliet Buck, a former editor of French Vogue, once told the Daily News, describing the restaurant as “Keith’s fully realized Paris fantasy, Paris without the pain.”

McNally’s restaurants have always traded on nostalgia. They are purpose-built, art-directed faux relics, misremembered ideas of what this Montparnasse brasserie or that Greenwich Village tavern must have been like. But now McNally’s fantasies, rooted in other times and other places, have become objects of nostalgic interest in and of themselves. Balthazar, Lucky Strike, Schiller’s, the Odeon—restaurants that he made look authentically worn—have now become actually worn. People go there not to visit fin-de-siècle Paris but to glimpse a much more recent New York as it’s disappearing in the rearview mirror. 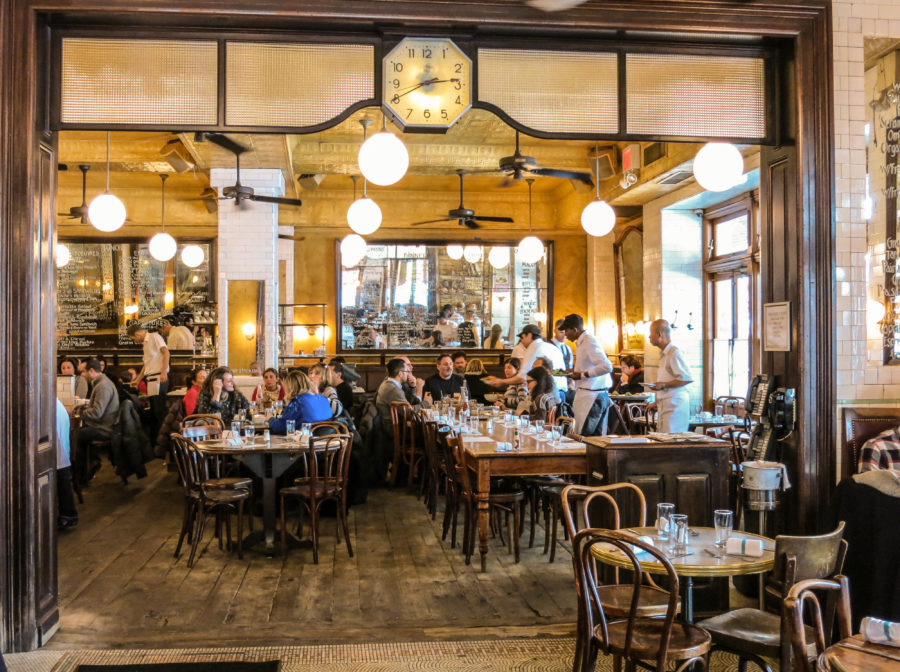 Witness the newfound success of the Odeon (now solely owned by McNally’s ex-wife, Lynn Wagenknecht), which has barely changed since its red neon lights first flickered on West Broadway 37 years ago. Suddenly, that restaurant is cool again, full of Condé Nast editors and executives from One World Trade Center who eat croque monsieurs and throw back martinis in weathered red-leather banquettes, perhaps imagining themselves as bit characters in Bright Lights, Big City.

As this city continues to build over its past at a disquieting speed, maybe the same nostalgic feeling that keeps the Odeon or Balthazar alive will make the rebooted Pastis seem like a reassuring presence in a neighborhood that has so little regard for its history? Surely, some version of Pastis in the Meatpacking District is preferable to another furniture store or coffeehouse?

“I don’t buy that,” says Jeremiah Moss, the pseudonymous longtime East Village resident who chronicles the destruction of the city’s urban heritage on his blog, Vanishing New York. “There’s a meme that’s going around and people repeat it all the time. It happened when John Varvatos took over CBGB: At least it’s not a bank or a Starbucks. What that basically implies is that in New York today we only have two options. We can either have something that’s high-end and exclusive or we can have banks and chains,” Moss says. “That’s nonsense.”

Purists like Moss may claim that the new Pastis only adds insult to the injury of hyper-gentrification—that, as he says, “The Meatpacking District as it was is dead. Who cares what goes in there now?” But more forgiving city dwellers will probably admit that this neighborhood could do a lot worse.

And as strange as it is to suggest, maybe places like Pastis or Balthazar or the Odeon—once the forward operating bases of gentrification—have become, in their own weird way, important parts of the city’s heritage. After all, these restaurants arrived so early, and have stuck around for so long, that they are by now something like the elder statesmen of the city’s urban renewal—comforting links to the past, even if it’s a past they helped to destroy.