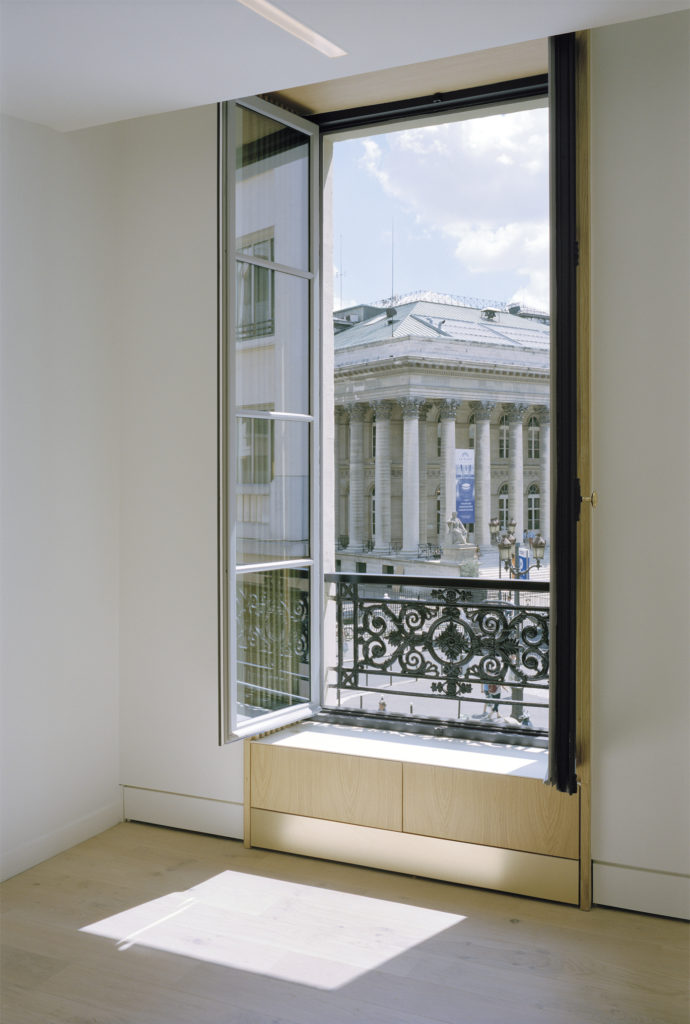 The List’s Project Spotlight column features unparalleled projects created by our forward-thinking List members. By going straight to the source—and having the designers demystify the methods behind their designs—we hope to enlighten and inspire our creative audience to further push the boundaries of what is possible in the realm of design.

Granted, there aren’t many particularly bad views in the 2nd arrondissement. Still, the top floors of the post-Haussmanian traditional limestone building Studio Vincent Eschalier was commissioned to work on offer a splendor most out of workplaces don’t. A short walk away from the Place de la Bourse, and surrounded by Place Vendôme, Gaumont Opéra, and Maison Klytia, the panorama here is magical—and that’s before the Parisian light floods in.

But the warren of sometimes shallow, sometimes narrow rooms that can make up Haussman-influenced buildings have a tendency to block off light and views from their inner workings. SVE—experts in the contemporary and the elegant—were commissioned to solve that with a more modern, more democratic approach to shared space, but the remit wasn’t carte blanche.

Client and studio alike knew that the interiors had to respect the classic rudiments of the space and include a top-floor extension that wouldn’t clash with the traditional zinc roofing around it, all while offering something modern, timeless, and ready for a century or more of use both inside and out—no mean feat.

Below, the studio explains how it approached the project and delivered a design that responds to the now, respects history, and invites in the stunning views and light around it.

Studio Vincent Eschalier is a member of The List, the destination for all things Surface-approved. Want to join The List? Contact our team to find out how to apply.

Project Description: Just minutes from the Place de la Bourse in the second arrondissement of Paris, Studio Vincent Eschalier has delivered the rehabilitation of an entire office building. It’s a balance of tradition and risk-taking in line with the efficient and unconventional style of the agency. For this rehabilitation in a historic district, the architect wished to highlight the building while respecting the architecture’s vernacular.

Challenges: The wish of Vincent Eschalier was to give a new life to this building while remaining anchored in its Parisian architecture. The choice was, therefore, to highlight the coronation with a unique and massive volume to make it visible from the Place de la Bourse.

Uniqueness: For this, the Studio has developed a technique used for one of the first times in France. Here, the usual zinc of Parisian roofs is substituted with similarly colored stone. This one, laid in a one-meter by one-meter slabs, gave the extension scale and softened the lines of the building. Also, so as not to affect the geometry seen from the Place de la Bourse, the lines of the railing have been geometrically drawn to appear as invisible. The purpose of the intervention is to give a distinctive brightness to this historic building; the architect adds a contemporary touch while respecting the soul of the structure.

Takeaway: The post-Haussmanian exterior is renovated with blue stone from Hainaut on the facade and the roof. It offers, with its rounded edges, a single and massive volume pierced with regular openings, also finished in brass. These new openings and the creation of an open terrace on the roof now allow future occupants to enjoy maximum natural light and a panoramic view of the Place de la Bourse.

What’s Next: The Studio is currently carrying out several rehabilitation projects of high-end offices in the heart of Paris. Also in the rest of France with a building in Lyon and two prestigious chalets in a ski resort.

For Blueprint Lighting, it's Custom-Made Midcentury Splendor on the Quick