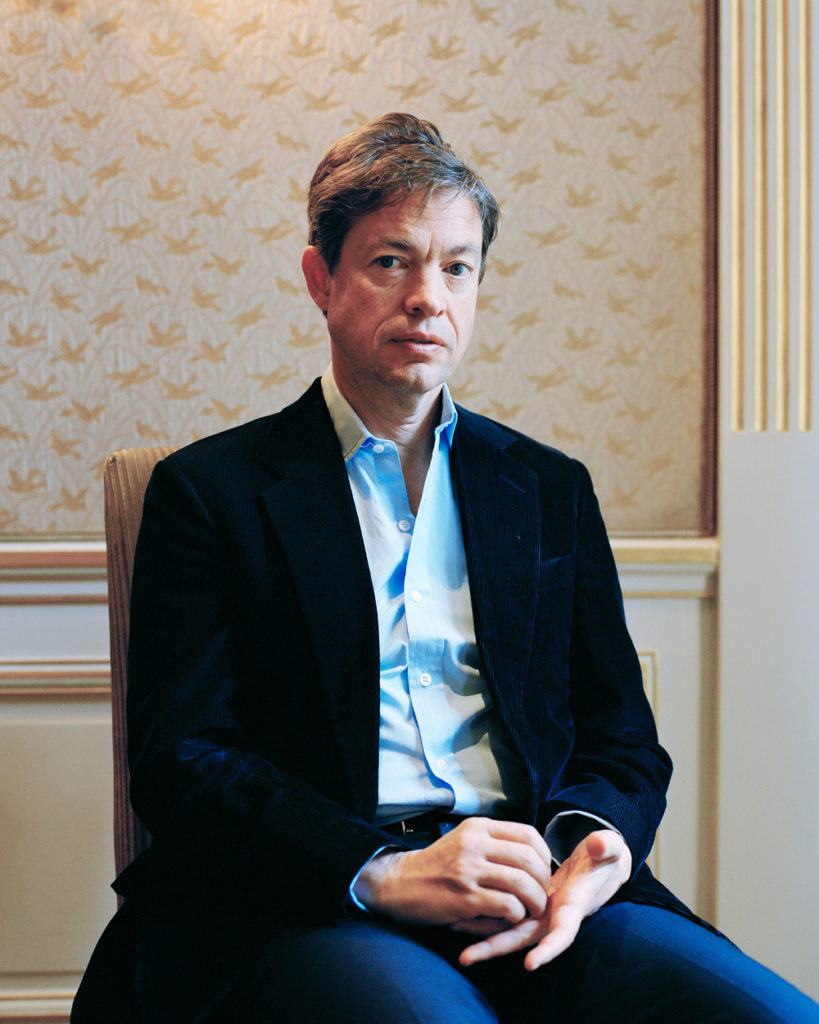 The financier, author, collector, and philanthropist Nicolas Berggruen was recently on his way to Basel from Paris when he spoke with Surface.

The financier, author, collector, and philanthropist Nicolas Berggruen was recently on his way to Basel from Paris when he spoke with Surface.

The financier, author, collector, and philanthropist Nicolas Berggruen was recently on his way to Basel from Paris when he spoke with Surface. He discouraged us from asking about his art collection and preferred to talk about his work through the Berggruen Institute and its recently announced Philosophy and Culture Center. Considering the billionaire’s pedigree—his father was a famous art dealer—it’s notable that today Berggruen invests in the cultivation of ideas, not necessarily art itself. It’s a risky enterprise in which success is immeasurable. Only time will tell if the project has an impact beyond its immediate sphere of philosophers, academics, and activists. Yet Berggruen’s approach reflects a welcome shift in priorities that seems to be spreading among the super rich: to consider how their passion for collecting, which often reflects an underlying intellectual curiosity, can transition into a patronage of ideas.

You recently announced an annual million dollar Berggruen Philosophy Prize, to go to a thinker whose ideas have influenced our world.

The idea is to reward philosophy and thought as a valuable occupation. The prize is an award for someone anywhere in the world who’s made a meaningful impact in terms of how we think. We want to give the same kind of recognition as other disciplines with large rewards—for example, the Nobel Prize or the Pritzker Prize.

What exactly is the Berggruen Institute?

The Institute started five years ago. Behind any political traditions, you have cultures. Certainly in the West, but also in the East, with Confucianism, Buddhism, and Taoism. To have an impact in terms of longterm political thinking, you really have to understand those cultures and their history of ideas, philosophy, and religion. I wanted to go back to the origin of different ideas and traditions that have shaped us. That’s a little bit of what we’re doing at the Institute. More specifically, we’re engaging thinkers and the public.

How does The Huffington Post’s WorldPost relate to these initiatives?

The WorldPost, which was created two years ago, provides a platform for active debate from many different points of view around important issues globally. In theory, it functions as a symposium for important thinkers, and it’s distributed through The Huffington Post, which helps to spread these debates and ideas widely. For example, we have a lot of coverage on Turkey right now. The country is an incredible place historically, but it has changed under the present regime in two ways: It has modernized in some ways, but it’s becoming almost reactionary in others.

You have plans for a physical space in Los Angeles—the Berggruen Philosophy and Culture Center—that you’ve called a secular monastery.

If you look at monasteries in the West and the East, even though they have very different religious traditions, they have similar functions: to provide people with a place to work, think, convene, and live. We aim to have a permanent site for the Institute that will offer something in that direction.

Is your vision to create a structure through which these ideas can flow?

The idea of conversation, and changing the level of conversation, seems like a recurring theme. The question is, how do you make these ideas relevant? When you take complicated ideas and try to translate them for a broader public—in a sense, allegorize them—they can seem almost to lose their value. In a way, I wish the opposite: that you take ideas, simplify them, communicate them.  People would be still interested and they would work. It’s a big question, and I’m not sure anybody has found a solution yet.

Are there any specific philanthropists and patrons who have influenced your current work?

If I had to name one that I think has influenced me a lot it would be George Soros. He did many courageous things with a foundation called Open Society when the Soviet Union collapsed. Working on the ground, he helped a lot of countries to develop thinking around new systems of government, including democracy, and it was very risky in the long-term sense. Much of his work was highly intellectual, and at the end of the day, I think it did have an influence.

Why did you choose Los Angeles as a base for the Institute and the Center?

Los Angeles may seem like an unlikely place, but sometimes things just happen, and in this case, they’re somewhat personal. Once I started spending more time in Los Angeles, I realized it’s almost the opposite of New York, where I lived a long time. It’s almost like a non-city, not urban in a traditional sense like New York, Chicago, Paris, or London.

What do you find special about the city?

L.A. has a sense of possibility that exists in the arts, and potentially in other areas—you can see it even now in technology. There’s a lot of energy. It’s not going to replace other cities, but it’s very open and things can happen there. It’s a city still in the making, almost like a city in the future. It’s a place that affords a lot of physical and mental space. The fact that it’s Pacificfacing is appealing, as well. We hope the Institute will be a contribution to the city and a West Coast center for thinking and development, as opposed to older, traditional locations on the East Coast or in Europe.

Where else in the world do you think about when you envision what you’re going to do in Los Angeles?

There are certain physical spaces that have been incredibly inspiring, and then there are certain environments that are inspiring—for example, monasteries or even campuses. Most of the physical inspiration comes from places that relate to L.A. in terms of climate, where you have the possibility not only of working indoors but also outdoors. Alhambra in Spain has some of those characteristics, as do some Turkish and Iranian sites that are very beautiful physically. In terms of architecture, I’m inspired by architects like Oscar Niemeyer. He built beautiful things in Brazil and similar warmer places. A lot of architects have done great work in northern climates, but haven’t yet taken advantage of somewhere like Los Angeles, where you can design spaces that function indoors and also outdoors. How did you come to be involved with the Los Angeles County Museum of Art? Your foundation has given the museum Chris Burden’s “Metropolis II” on a long-term loan. LACMA is physically near the center of L.A., and because it’s an encyclopedic museum, LACMA could potentially become a cultural hub for the city. It’s being energized and transformed now by its director, Michael Govan.

You talked about how much opportunity there is in such a young city. Since you’ve studied government structures, do you have any thoughts on the state of patronage in L.A.?

The issue in L.A. is that when it has happened, donors tend to do their own thing as opposed to collaborating. You have the Hammer Museum, the Broad, the Getty, the Norton Simon—each museum stems from one person. Not that these institutions are not great, but it’s hard to get the community to work together.

Do you think that the introduction of metrics into art management is dangerous?

In the past, it used to be the other way around. You would make a gesture somewhere, but you wouldn’t know how efficient or effective the gesture would be. Not just in the arts, but in philanthropy in general. So in the past it was not measured enough. Now I think there is a danger that everything gets measured, and big data is easier to measure. I think there needs to be a space where you do things that are potentially not measureable, or harder to measure, and maybe at first glance don’t seem to have the biggest impact. You’ve said, “One potential advantage of private wealth is that one can take on things that are not immediately measurable.” I’m willing to do things with the Institute that are long-term and quite risky. Some of it, we hope, will have an impact. How tangible is the impact? Who knows? But we’re sure that we can do it.

What gives you the most pleasure collecting-wise?

Everybody is different, but my way of thinking about that is this: If you’re buying a work of art, why not share it directly with the community by giving it or lending it to a cultural institution? That way you’ll share it with the most people. I’m not against the idea of collecting for oneself, but if it’s a great work of art, maybe share it with more than just yourself and your family and friends. Do you feel that the art world has a harder time incubating and spreading radical ideas now that art has been accepted as a commodity? Is the market taking away from art’s symbolic power? No. I think one can complain that art has become so commercialized and a consumer item, but that’s the society we live in. You cannot single art out as something pure. In today’s world, everything is consumed and communicated and shared all the time. I don’t think it’s that easy to want to isolate anything, including art. In my mind, art should help you pause, think, and put things into perspective.