There isn’t another hotel group right now with more cojones than Grupo Habita.

By Nate Storey
Photographs by Undine Pröhl September 21, 2015
Share
Back

There isn’t another hotel group right now with more cojones than Grupo Habita. Since the Mexican boutique chain’s inception in 2000, the four-man team that forms its brain trust—Carlos Couturier and brothers Moisés, Rafael, and Jaime Micha—has cultivated what Spanish speakers reverently call onda (loosely translated to essence) at their openings across Mexico (in addition to one in New York) by staying true to an intrinsic but unusual principle: Go where nobody thinks to go. On its face, that seems like a counterintuitive decree to live by for a hospitality company putting tens of millions of dollars on the line—until you see the results.

The 14 hotels in Habita’s portfolio all carry the same strand of DNA: they’re smart and detail- focused, possess an artistic spirit, and function as cultural arbiters. Yet each one maintains a tactile, distinctively local vibe by bringing its surroundings inside. Casa Fayette, a new hotel that utilizes the bones of an old colonial manse in Guadalajara’s design district—its 37 rooms sit in an adjacent new-build structure—is the latest example of Habita picking an out-of-mind destination as its next home. (Shown here is an exclusive first look at the property.) The country’s second-largest metropolis hasn’t entered the leisure travel lexicon yet, but its nascent art scene is begging to be discovered. Less an interloper hell-bent on gentrification than a new arrival that just wants to fit in, Fayette subtly blends into its leafy neighborhood lined with galleries and nondescript restaurants.

“We only create one hotel a year in order to understand the community, its vision and tastes,” says Carlos Couturier, a citrus farmer and the public face of Habita. “Our goal is always to be local. We don’t build hotels; we curate them. The goal is to deliver a human experience, not an architectural or design one.”

Habita feels like an indie rock band on the verge of mainstream stardom. A few of the group’s cult hits: Hotel Habita, the slinky, opaque debut EP that opened in Mexico City’s Polanco district when the city was still too high on the sketchy meter to attract the culture cognoscenti; Deseo Hotel and Lounge, the seductive whitewashed retreat that anointed Playa del Carmen the next Yucatan playground in 2001, back when it was nothing more than a jumping-off point for snorkelers heading to Cozumel; the French Neoclassical Condesa DF, the first design property to plant its flag in Mexico City’s rough-around-the-edges arts quarter in 2005; Hotel Americano, which cropped up in 2011, on Manhattan’s far west side, a dead zone of industrial blocks and early- closing galleries; and Hotel Boca Chica, a mid- century bolthole that brought 1950s glamour back to tourist and springbreak hellscape, Acapulco, in 2009. Habita has a knack for get- ting to a place before it happens, or maybe it happens because wherever Habita goes, a fashionable coterie soon follows.

“They have their own following, and it’s a crowd you want to please,” says Britt Moran, a North Carolina–bred partner of Dimore Studio, the Milanese design firm tapped to do Fayette’sinteriors. “It’s the cool, artistic crowd who is in the right places and is kind of jet-setting from party to party.”

It’s a rare commission for Dimore—the ongoing redesign of the venerable Grand Hotel et de Milan is the firm’s only other hotel—but Moran says working with Grupo Habita was an easy decision, even fate: a serendipitous encounter on a far-flung Greek island led to the collaboration. “We had our side with Italians and their side with Mexicans—two strong-headed people,” jokes Moran. “But Habita is really easy to get along with, and they’ve done so many hotels. They were able to teach us how to look at areas or deal with certain spaces.” 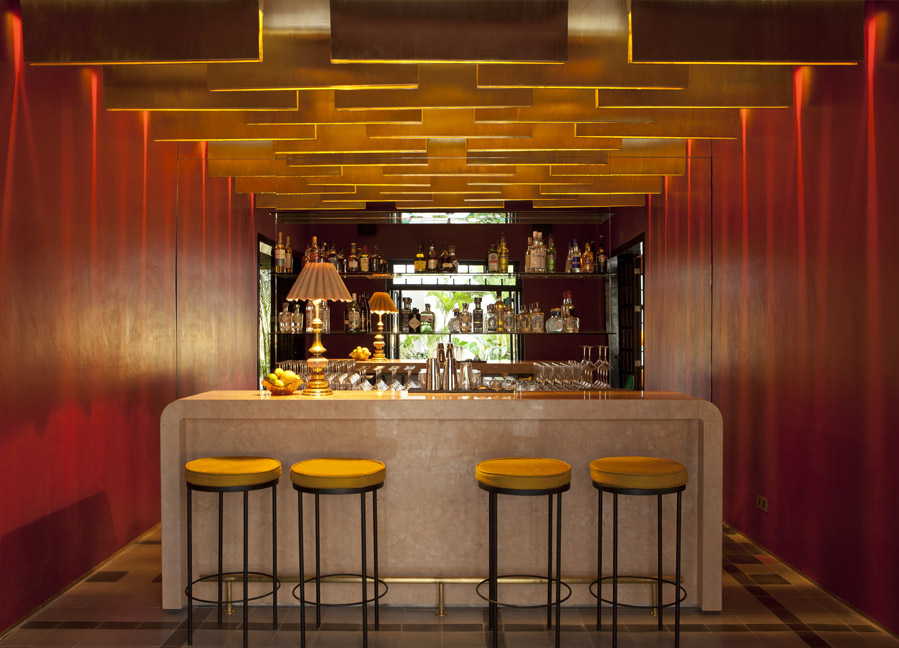 Dimore and Habita also shared a vision that Fayette should reflect Guadalajara. “It’s the birthplace of the famous architect Luis Barragán, who won the Pritzker Prize [in 1980], and the hotel is in the same neighborhood where a lot of his early work is,” Moran says.

“We drew a lot of inspiration from that.” A Barragánian influence is unmistakable in Fayette’s vibrant palette: the peachyreception area; first-floor breakfast room’s khaki–green walls and tropical print chairs; Amsterdam red-light hues of the “pickup bar” right off the courtyard; and shades of blue that stain Mondrian-esque windows in the bathrooms. “Carmen Miranda meets super colorful house,” says Moran, referencing the midcentury Brazilian performer’s bright cos- tumes and fruit hats.

A cohesive 1930s and ’40s theme is pre- dominant throughout the public spaces and guestrooms, including custom furniture from Dimore that nods to the Art Deco past. (They also maintained the original windows and woodwork.) Partitions were knocked out so guests can flow with ease from the breakfast room and outdoor courtyard to the second- floor pool bar, which has an alcove outfitted with a Jasper Morrison for Cappellini sofa and retro black-and-white television set. “People expect something new and innovative and cool, especially from the Grupo Habita guys,” Moran says. “At first, we were thinking of adding another bar, but then somebody threw out the idea: ‘Let’s just throw on old movies.’”

A distinct Mexicanness permeates every corner of the hotel, from the local artisan-made tiles in the rooftop spa, to the brass metalwork in the headboards of the beds, to the open-air quality of the social spaces. Or as Moran puts it, “ It’s sexy and exotic. We’ve been indoctrinated with this word ‘sexy’ for two years, and it kind of rubbed off on us.”

On the surface, Guadalajara doesn’t seem like a town that does sexy. It’s horizontal and sprawling; its urban grit smacks you in the face. (Even in the design district, it looks as if an earthquake has displaced the sidewalks.) It’s the opposite of flashy Mexico City, with its upscale fashion designers, renowned cultural venues, and world-famous chefs. In other words, it’s pretty damn perfect for a Grupo Habita hotel.

“The thing that attracted us to Guadalajara was the human aspect—there’s a slow-life attitude that’s becoming rare in large cities,” Couturier says. “There’s young and creative artists and an original gastronomic movement. All of this is happening under the radar, which makes the city even more interesting for Grupo Habita.”

Over the last decade and a half Habita’s well-executed boutique properties have earned them laudatory labels—Mexico’s Ian Schrager!—and high acclaim within the indus- try. Now they plan to conquer a new frontier: the U.S. In 2016, Chicago. Then an L.A. outpost. Will their blueprint translate in the ephemeral, sharp-elbowed hospitality landscape of the States? “Our magic formula is the passion we inject into every one of our projects,” Couturier says. “We start the process every time all over again. We’re the anti-franchise of the hotel industry. Each hotel is like a child to us—they come with their own genes and identities. One might dream for a specific life for them, but they end up just being themselves.”