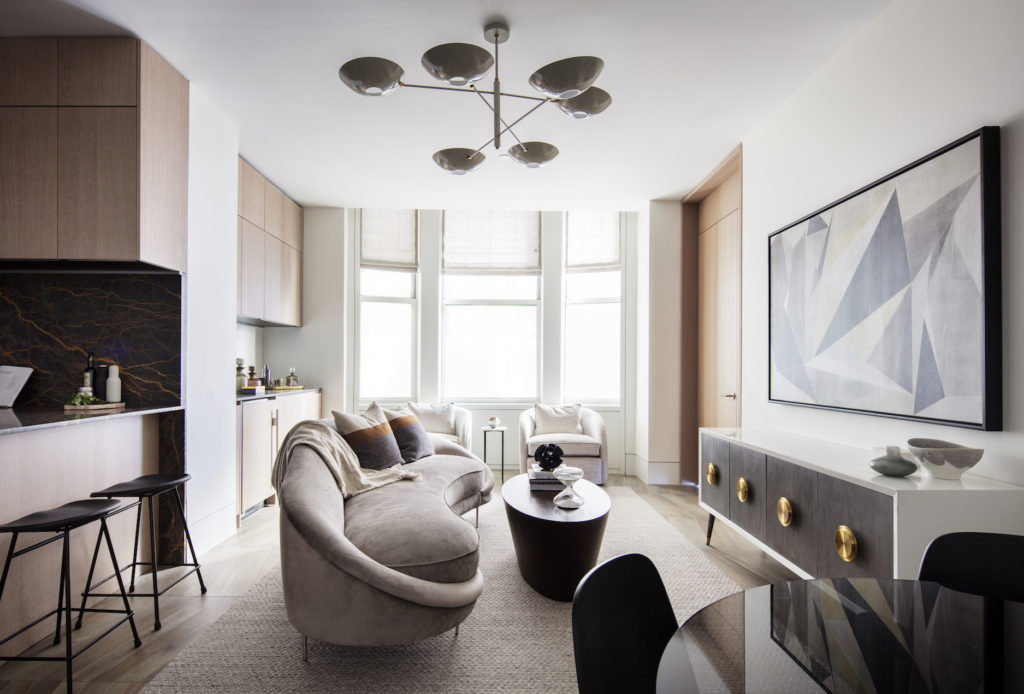 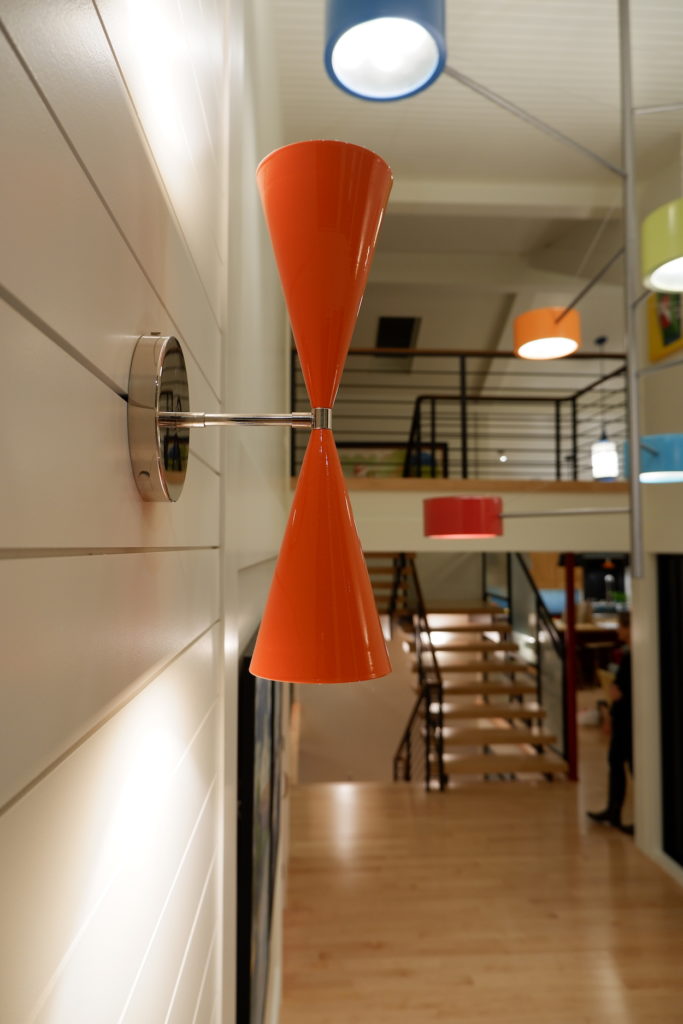 "I grew up in a county with one stoplight. But I had this very small, specific window into what the wider world looked like, and just that one little glimmer always got me."

"I grew up in a county with one stoplight. But I had this very small, specific window into what the wider world looked like, and just that one little glimmer always got me."

As the self-described “chief luminary” of Blueprint Lighting, Kelly Aaron has centered her business around an ethos that may sound, at first blush, aesthetically sterile: Democracy!

But Aaron and Blueprint’s take on the ideology couldn’t be more prismatically vibrant. With 36 original, in-house color options ranging from bubblegum-pink to fiery red to aqua (in additional to the more neutral colorways one would expect), Blueprint has set itself apart by offering the luxury of choice. In line with its mantra (the answer is always yes!), in addition to an atypically wide array of colors, Blueprint offers just a three-week lead time on most products (three! weeks!), which is a much speedier turnaround time than most custom lighting businesses.

Aaron sat down with Surface to discuss her Asheville, North Carolina roots; how she found her niche in the lighting industry; and Blueprint’s contributions to season two of The Marvelous Mrs. Maisel.

Blueprint Lighting is a member of The List, the destination for all things Surface-approved. Want to join The List? Contact our team to find out how to apply.

I’d love to hear about how you got your start in the industry.

We had a real sort of aha! moment. I had been selling midcentury furniture since 1999, when I was in my early twenties. I had done museum work, I’d done all sorts of things around midcentury design, and had wrangled my husband into it. And then we were at an auction buying midcentury pieces, three or four years ago. We had bought what appeared to be a pair of giant midcentury Italian chandeliers. We actually got made fun of at auctions by other midcentury dealers, saying, “Those [fixtures] are new—I think they’re making them in Italy.” We were like, whatever, they’re amazing. We paid quite a bit of money for them, which is why people were making fun of us.

We immediately put these on hold for several designers, including Jonathan Adler. His interior design office called and put it on hold, and the allure of making $15,000 several times instead of just two times was pretty great.

So we figured out how to make lighting, and we did not make lighting before that. I’ve done vintage and midcentury pieces for twenty years; this just was a natural evolution. Now I’m all about getting rid of vintage to focus on lighting. It was just the allure of having a renewable product.

With vintage, you find it, buy it, have it restored, and then—once you sell it—it’s gone. So there’s not a great marketing opportunity. You can market your brand, you can market yourself, but you can’t market the pieces; market them once, they’re sold. And so this is so much cooler because we can have a product and really focus on growing the brand a little better.

It was a pretty instant success, and we knew that we’ve stumbled on to something great. It wasn’t meant as DIY at all. It was very money-driven, and, as bad as this sounds, it wasn’t about a passion for creating even—it was really just smart business.

I mean, we are makers, my husband does prototype everything and has gotten very adept at plan drawings and blueprints for lighting. And he’s from the music [world]; like he was an A&R guy for Clive Davis at Arista Records—his background was not in designing, or [artistry], he wasn’t any of those things. We’re business-driven and figured out how to do it.

I’m wondering if your upbringing influenced the way you think about or experience design?

My upbringing was in a small rural farm town in North Carolina, but I had a mother who really sort of pushed me toward the arts and made sure that we had season tickets to Broadway touring companies in Norfolk, Virginia. We would drive an hour and a half to get there, so I always had exposure to bigger, better things, even though I grew up in a county with one stoplight; like it was really, really tiny. I had this very small, specific window into what the wider world looked like, and that that was always an interest to me. Just that one little glimmer always got me.

I guess I just always craved bigger, better things, and I’ve always sort of craved good design. In college—also in North Carolina—I went to an incredibly liberal arts school with a wonderful museum on our campus. I think that, too, sort of brought me to the awareness that good design was out there. And then once I was aware of it, I wanted it. I just wanted that to be part of my life.

I know that North Carolina also has a huge presence in the furniture industry.

It does. That didn’t really influence me that much. I mean, I was aware of it. It was more when, in my early twenties, I had a shop in Asheville, North Carolina, where I lived for sixteen years.

It wasn’t until I was probably like 22 or something before I even knew that existed. I lived in Asheville at that point, and Black Mountain was ten minutes away and I was like, What the hell?  And it just like blew my mind.

I got really involved and, at the time, the Black Mountain College Museum + Art Center was still a fairly fledgling organization. They’re now, at this point, quite important as a small museum, but, at the time, they still didn’t even have a permanent home. And so I started just kind of casually helping them because I wanted to be involved in the next thing; I was helping with an exhibition, and then I was on the board, and then I gave them a lot of blood, sweat, and tears for a long time. I actually just went to North Carolina to visit back in November and got to go by and meet their new executive director and they’re in this wonderful big new space.

What aspect of the brand are you most proud of?

I think our ability to give someone a fully custom product without charging an obscene amount of money, and making them wait an obscene amount of time to get it. A lot of companies will do those sorts of customizations, but they want you to order fifty of them to do it. A lot of times, that’s because they’re having their parts made elsewhere and they have to meet certain minimums when they purchase.

For us, we are actually cutting all these pieces in northern New Jersey. So like it’s all actually happening here in a workroom. So if someone says, “I need this guy, but I need it to be a seven foot oval, can you?” Yeah, it’s fine—and we don’t have to charge you. You know, we’ll charge you a little more for materials, but we’re not going to charge you this crazy edit fee, and we’re not going to make you order ten of them. Our willingness to do exactly what the customer wants and needs is what I’m most proud of because I don’t, again, I don’t think it’s a capability that a lot of companies have. Or if they have it, they don’t want to do it because, in a lot of ways, it’s not the most effective. It definitely doesn’t lend itself to assembly line–style making. We are definitely making things one piece at a time, but doing it in a quicker way than companies that do business that way. So we’re kind of trying to run between being a manufacturer and a maker.

It’s sort of a different model.

It is a different business model than is common. I’m not saying we’re unique—because I hate using that word if I don’t know for sure that we are—but it seems it is definitely an uncommon business model in the lighting world. So I’m very proud of that.

I know that you have contributed in some capacity to The Marvelous Mrs. Maisel television show. Tell me about that.

Well for one thing, we’re huge fans of the show already, so that was super fun. Through REFINE LIMITED, our vintage furniture brand, we already were pretty well-known for renting furniture for commercials, TV, and photo and fashion shoots and things like that. The Maisel project came to us because they had a very large, vintage chandelier that had the same shades as our Ludo chandelier. They asked, “Can you create a chandelier to exactly match this one we have, because we have this one vintage one but we need two,” and we were like, no problem.

They sent us all the specs and we’re like, that’s cool, we already make a similar thing. So we made a chandelier to match, and then they came back and said, “Okay, now we need 42 sconces of the same design in bright red,” and then some in pink and whatever. Basically, all the scenes in the Catskills in season two you’ll see our lighting all over the place. It’s the best show; I love it so much.

Our designs are sort of balanced that way. So Ludo, that shape, is based on a fifties design, but then we have a lot of original design as well; we try to do some of both. The vintage designs that we re-create are out-of-production designs that people still want. Like even 1stdibs used to come to us and go, “Hey, we’ve got a client that wants fifty of the shape but it’s vintage and there’s only two on our website, so can you make them for us?” And so that’s been really important. A lot of vintage designs are still being made, but there are sort of designs that just kind of went away and no one’s making them, they’re still important. So we do like being able to produce things like that.

By the Numbers: Purl Chair by durodeco