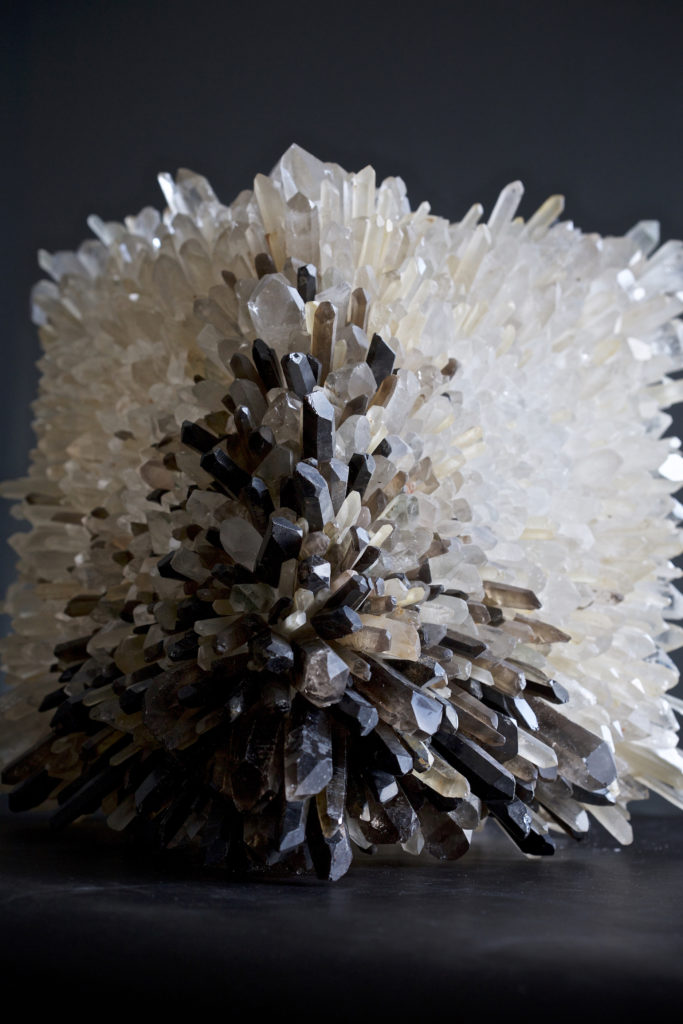 At the turn of the millennium—far before the advent of Instagram lightworkers—Australian designer Christopher Boots was already incorporating minerals into his works.

How serendipitous it is, then, that the post-11/9 crystal craze hit at a time in which Boots has already amassed international acclaim? Through his emphasis on natural materials, Boots has garnered a dedicated clientele in addition to placements in luxury retailers such as Hermès. Below, Boots reflects on the human condition, how crystals play into humanity, and the benefits of isolation.

Christopher Boots is a member of The List, the destination for all things Surface-approved. Want to join The List? Contact our team to find out how to apply.

How did you get your start in the industry?

I did work with a lighting designer when I finished studying industrial design, and worked under his guidance for a couple of years, just like a mentorship sort of role. Which was really amazing, being able to learn about how lighting came together, how it was constructed historically. After that, I started my own business in 2011. It started very small. It was just myself and a friend of mine giving me a hand, and then it really started to snowball, bit by bit. I was getting one private commission after the other. It’s been a very organic process, and I couldn’t really put it down to one particular break.

I’m wondering if your upbringing influenced the way you design, experience design, or think about design.

I think growing up as an only child, I had to entertain myself quite lot. I spent a lot of time in nature, and that would either be climbing trees or collecting feathers, collecting rocks, going for lots of walks in nature. That, to me, was my primary inspiration that then influenced my design work. The things you do as a kid pretty much end up being the same [things you do] as an adult, I think.

Australia is particularly isolated—yet I find more and more creatives expating from there to the States. I’m wondering if you think that isolation is an impetus for creative drive or creating one’s own world?

Absolutely. The distance that we experience in Australia really is a double-edged sword. So in one way, we have this cultural delay at times, or this almost disconnection, being so far away from what happens in the Northern hemisphere. And I kind of like fact that we’re on a different sort of tempo or vibe, because we also have a little bit of this cultural space between the speed and everything that goes on in places like New York. I think it creates a nice difference in frisson.

It’s hard to put my finger on it, but I find that this kind of space allows for different ways to address the question of what we need in our environment in different ways—even something as simple as the quality of life in the areas.

The quality of some areas is actually quite strong, it’s quite intense, so a lot of things can feel quite saturated and it feels a little bit more subdued in the north. I think this kind of difference is really good, we end up with very regional, interesting things going on. A lot of Australia’s culture is, well it’s a multiculture, so you can’t put your finger on whether it’s Asian or whether it references a more West coast, Californian, easy-living kind of vibe.

I find with my work, I naturally tend to look at a little bit more old school European techniques. It’s hard to locate a particular Australian vibe. But I think the [multicultural element] happens because Australia is built from a whole lot of other cultures who then come to a place that is very far away from a really established culture. In a way, it can tend to be a little bit more wild, and maybe a little bit more unexpected.

I know that your works are in part inspired by your Greek heritage—how does that influence explicitly manifest?

In order for me to have this first-world life, my grandparents had to emigrate from Greece, leaving World War II. After World War II, Greece [was] decimated—there was nothing there, and they made that choice to come here. They could have gone to South Africa, or they could have gone to Canada. And by virtue of that decision, I have grown up in a city which is cool, and it’s a design city, and it’s all those things, but… what if they went to South Africa?

You rewind that story a couple thousand years, what do you have? It’s actually quite incredible to realize the intensity and the tenacity of the human condition. To be able to live, to survive, and to go forward. So I think that if we don’t honor that or at least acknowledge that, I think we’ll become lost. So I definitely don’t deny bringing in these kinds of special little Greek god and goddesses names, which I think is nice to just have a bit of a hallmark and an acknowledgement of our past that we’ve come from.

So speaking of the human condition, I love that some of your designs incorporate crystals. I’m wondering what the impetus was for that?

As I said before, I’ve loved to collect rocks and minerals—just going for walks as a kid—that’s what I’d do quite often, as a little only child loner nerd. I found a crystal on a beach once when I was maybe eight years old, and it was like, “Wow, what’s this thing that’s got a structure and everything?” And then I got a little pocket guide book on rocks and got totally entranced by the whole world of rocks and patterns and so forth.

My little brain was really triggered by all these amazing things I hadn’t seen, so I guess it was from a place of curiosity and exploration that really started early on. And then obviously growing up, that didn’t go away, and discovering, reiki, healing, and metaphysical properties were more than the just the object. This object represents the unseen.

Quartz was one the initial materials I worked with because, for me, it was so beautiful—so clear and so pure. With my design, I try to be as reductive and purist as possible because in my world, you need to honor the materials that you have and keep them as pure as possible.

Interesting. So it’s just completely serendipitous that the crystal craze paralleled and even came after when you started working with them professionally?

Yeah, I guess. That sort of really blew up in the past few years. All of that going on which is, I think, really cool. Because ultimately, we need nature in our lives; we’re so disconnected by technology, by all of these bubbles that we work in, by the fact that we live in houses that are built in all these intense materials, but everything is so processed. So much of our life contains processed items that, again, become so divorced from the origins of nature. So to be able to see things like crystals and rocks as natural materials in our lives, whether they’re a little piece sitting on a table or a light fixture. I think it’s really important to be able to give people that reference back—it’s kind of honoring the place that we come from.

Take me through the Humming Puppy NYC project—how did that come together?

It’s a really, really funny story. That was a random one. The fixture that Humming Puppy had there in New York, we call “Goliath.” We actually made “Goliath” as a pet project. We had an exhibition in Los Angeles in 2016 called “Elemental,” and we decided to make this giant light fixture, so it was really the first piece that we made that was I guess, not so precise. I can’t remember how much it weighed, but somewhere around several hundred pounds, so it’s a really big baby. And some of the crystals are probably like six inches, seven inches in size—they’re massive.

To cut a long story short, we actually just made this piece just for the love of it, and we hung it up there. I think it ended up coming back to Australia and we had it in our studio. Jackie Alexander, who’s the owner of the Humming Puppy, walked in one day and she was like, “Oh, my god, this is it; we are getting this, this is everything.” And boom, that was kind of it. So it wasn’t made specifically for Humming Puppy, but Humming Puppy found it and was just delighted. Maybe once a year or so, we just make things that are not for a client, that are made just for exploring materials or pushing the boundaries. And so that’s how Humming Puppy came to be.