Design Dialogues No. 46 with R/GA

Surface magazine’s editor-in-chief, Spencer Bailey, spoke with Bob Greenberg, Vimla Black Gupta, and Kinjil Mathur about how design is evolving through technological innovation, and how it’s shaping brands for the future.

Surface magazine’s editor-in-chief, Spencer Bailey, spoke with Bob Greenberg, Vimla Black Gupta, and Kinjil Mathur about how design is evolving through technological innovation, and how it’s shaping brands for the future.

On May 16, Surface hosted the 46th installment of its Design Dialogues series. This edition featured Bob Greenberg, founder, chairman, and CEO of R/GA, Vimla Black Gupta, chief marketing officer of Equinox, and Kinjil Mathur, chief marketing officer of Squarespace, and took place at the R/GA office in Hudson Yards. The four discussed how design shapes the way they lead their companies—specifically how it influences their perspective—and how technology and innovation are driving the evolution of design for the future.

Greenberg, who founded R/GA in 1977, took a step back to analyze the impact of design on his namesake brand early on in the conversation: “There’s a lot of things we can do to change the world, and to make it a better place to live. To me, design just takes the incredibly difficult complexity of everything that’s happening today, and makes it understandable.”

“Design is no longer a luxury,” Mathur—who is consistently breaking boundaries in the predominantly male-dominated tech world—pointed out, “it’s an expectation.” Gupta—who has been a leading force at Equinox since leaving Estee Lauder last winter—agreed, adding, “Aesthetics are everything. Especially in the way that they can transform a person’s experience. [At Equinox], design is at the crux of everything we do … we believe a life well designed is a life well lived.” She continued, “Every moment is a sensorial opportunity to be inspired—whether it’s the fragrance that envelops you in in the restroom, or the wood floors when you’re lying down in shavasana.” 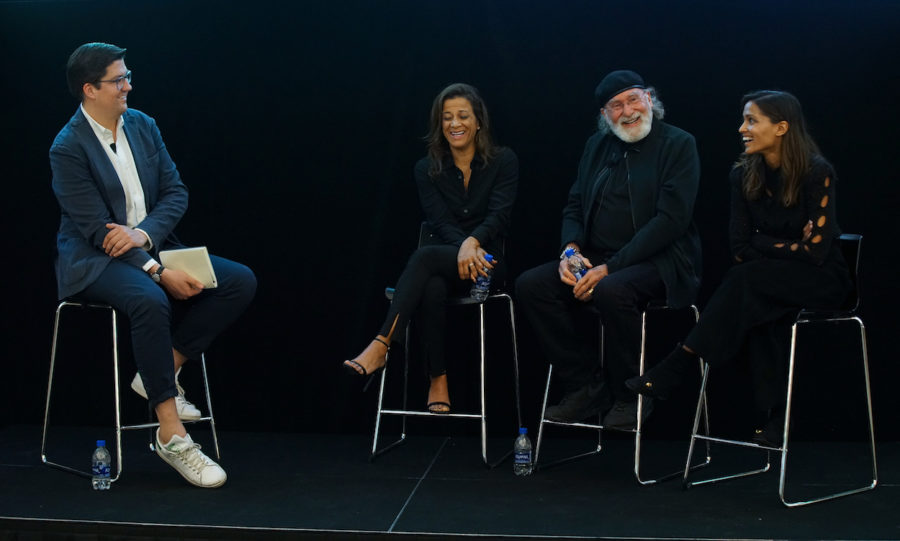 Bailey ran with this angle for the continuation of their discussion: “Design, when smartly combined with technology, can encourage us to slow down, but can also cause immense disruption,” he said, before asking the trio how they combine these ideas in their respective organizations. Perhaps surprisingly, Greenberg mentioned that in his experience, he’s found that “people would love to have technology slow down at this point, but it’s only going to move exponentially faster.” He continued, “[The public] is not ready for the technology that companies like Google and Amazon are about to release.”

Gupta countered that, saying, “Technology is just an enabler for a more complete life. [Equinox] looks at technology as a way to [improve your life] 24/7; we see it in the way of enhancing the things we already do, and helping us to do those things better.” In the same tone, Mathur finished by stating, “I think technology is not supposed to disrupt, but it’s actually to help people construct. From our standpoint at Squarespace, we’re supposed to help people construct their business, to help people go after whatever their creative ideas are, and to ultimately succeed.”

Read more about how Bob Greenberg has built R/GA into far more than just an advertising agency, here.