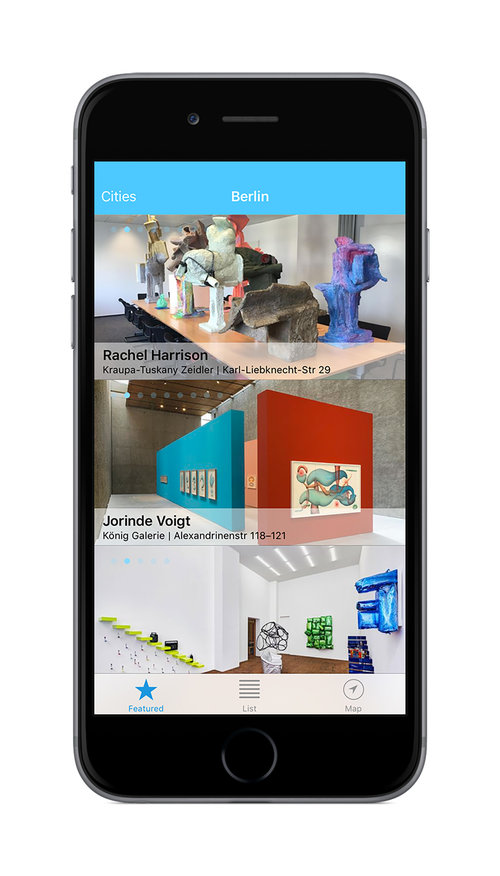 The app See Saw has become a go-to for denizens of the New York art world as a way to easily reference gallery shows on view in a given neighborhood. Created by Ellen Swieskowski in 2014 with help from her programmer brother, Patrick, it initially listed New York shows in Chelsea and the Lower East Side while allowing users to pin them to a built-in, Apple-hosted map. It quickly caught on with curators and journalists who needed a way to manage an overabundance of shows in the given locales, and word spread. Since, See Saw has expanded to cover other parts of Manhattan, as well as Brooklyn, and, last month, it officially rolled out guides for Los Angeles, Berlin, London, and Paris. “There are so many cities we’re interested in expanding to, but as a starting point these seemed like the major international cities that people travel to most frequently for the galleries, art fairs, and auctions,” Swieskowski says. “The app is great for keeping track of exhibitions with a large number of galleries in concentrated areas, so that’s also a big factor.” Behind the scenes at See Saw, building out the listings takes straightforward data entry that includes venues, dates, and, if available, the press releases and images from each show. Meanwhile, Swieskowski counts on a trusted international network of gallerists, artists, and others to find out about new spaces. “I’m always surprised at how many interesting galleries people tip us off to that aren’t on the radar.” No doubt See Saw users see it the same way.