Egg Collective Makes a History-Laden TriBeCa Storefront Their Own

Having outgrown their previous space, the venerable furniture studio founded by Stephanie Beamer, Crystal Ellis, and Hillary Petrie upgrades their showroom to a storied ground-level space with a little help from their friends.

To find a more spacious home base, the trio didn’t need to look far—they soon discovered a vacant ground-floor space in a nearby 19th-century building with an illustrious history. “This landmarked building’s corner storefront immediately captivated us with its yellow Roman brick and red sandstone,” the trio says. As they stripped away the building’s layers—both literally and figuratively—to prepare for the big move, they discovered the address once housed a grocer, an Ethiopian restaurant, and a Thai restaurant since liquor importer Joseph H. Bearns originally set up shop in 1893. (The building even played a starring role as Hotel Broslin in the 1982 film Basket Case.)

Most recently, however, it housed a legal office, which was broken up into partner offices haphazardly strung together. To make the space a suitable, cohesive showroom, a full gut renovation was in order. “We were trained as architects, so we’ve always served as the designers of the spaces we’ve occupied,” they say. Their solution to the cramped plan entailed creating two expansive, light-filled rooms that frame two smaller, vignette-like spaces, letting visitors pace their experience when viewing the brand’s artfully arranged furniture. (“The interior required a good deal of imagination.”) When it came down to the details, Egg Collective simply called up their friends. Highlighting the transitional spaces are specialty low-VOC wall treatments from Callidus Guild’s new Matte Collection, which naturally purifies the air, and textile artist Hiroko Takeda, a frequent collaborator, created exclusive boucle and upholstery fabrics.

The storefront’s diverse history ended up influencing far more than the final layout. In concert with the grand opening, Egg Collective also unveiled a collection of never-before-seen pieces including the Landry Bookcase, Hornbake Sofa, Finn Table, and Martie Desk/Console. Having designed the collection simultaneously while renovating the showroom, the trio found themselves constantly moving back and forth between the scale of architecture and furniture. “We were inspired by the round, sinuous shapes that occur primarily in the plan,” they recall, noting how the curvature of the walls and the Hornbake’s cushions slightly play off one another. 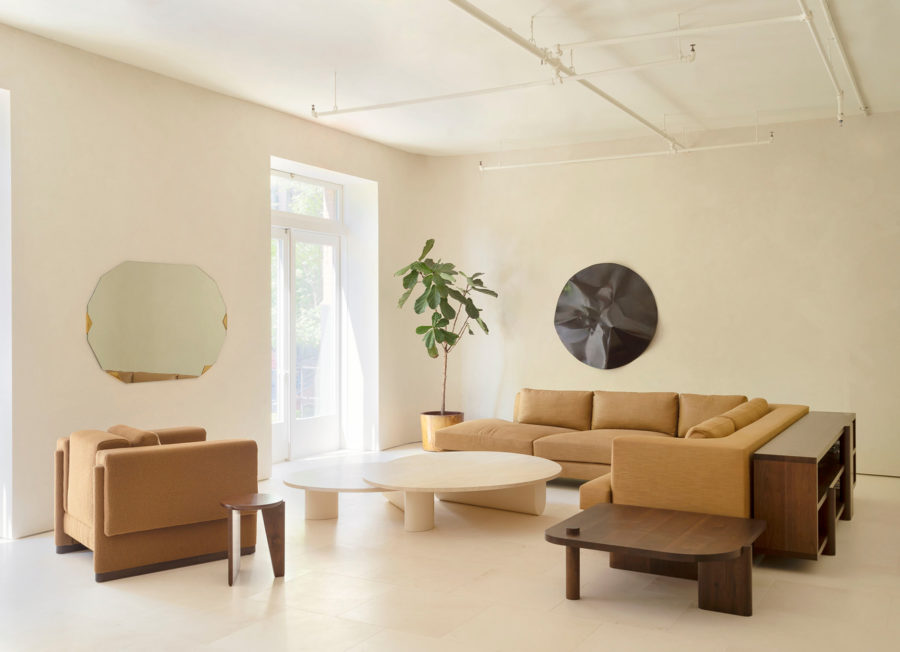 The increased square footage also gives the trio more opportunity to pursue one of their greatest passions: championing fellow artists and designers. The showroom’s opening coincided with the launch of “Material Matters,” a group exhibition featuring artists such as Mimi Jung, Kristina Riska, Matthew King, Tealia Ellis-Ritter, and Stephen Somple, who all push material boundaries in their work. It marks the first in a series of exhibitions Egg Collective will host throughout the year, building on the resounding success of “Designing Women.” If precedent holds true, expect both legends and discoveries. “Changing up the showroom around these exhibitions and with new iterations of our work will keep it feeling fresh.”

With the opening behind them, Egg Collective has entered back into the swing of things. But they can’t wait to share their space with the design community again. “It feels like a dream. A retail-level space has always been our goal, and it still doesn’t quite feel real.”

A Wave of the World’s Leading Artists Combat Marine Pollution