The Unsung Utility of Knitted Textiles

At Copenhagen’s 3daysofdesign, Kvadrat gave 28 designers carte blanche to create objects of desire using fabrics from the Febrik collection. The grouping illustrates how knitted textiles can come into play beyond apparel—and coalesce with cultural handicraft traditions.

We’re all familiar with knitted textiles in clothing—they feel smooth and soft against our skin thanks to their form-shaping abilities and the way they stretch around the body. “Although knits are well-established in fashion, they were unknown within interior design until a decade ago,” says Renee Merckx, Febrik’s creative director. “It’s those exact same qualities that draw us to knits in clothing which furniture may also benefit from. Knitted textiles naturally follow form, especially when it comes to upholstering curvy and spherical forms.”

To illustrate the versatility of knitted textiles, Kvadrat enlisted 28 experimental designers to dream up one-of-a-kind objects using the Febrik collection, which the Danish textile brand acquired in 2018. Each object stars in an exhibition, titled Knit!, that headlines Copenhagen’s annual 3daysofdesign festival. (The works will also display virtually through December.) The brief, explains Kvadrat’s Njusja de Gier, was simple: “create an object where knitted textiles are the protagonist,” and show that textiles can be used for more than simply upholstering furniture. She further notes that since these aren’t commercial objects, designers had carte blanche—and could use as many textiles as they wanted.

Each designer delivered a mind-bending concept that conveys the novel uses of knitted textiles and pushes boundaries of what can be achieved within their respective disciplines. And in many instances, the objects spotlight their designer’s cultural heritage. Objects of Common Interest, the Athens and New York–based studio helmed by Leonidas Trampoukis and Eleni Petaloti, crafted a pair of dynamic fabric-clad fluted columns that draw visual cues from industrial circular knitting machines and the Doric Columns found throughout ancient Greek architecture. The industrial design practice Visibility, meanwhile, channels co-founder Sina Sohrab’s Middle Eastern heritage into a circular ground-level seating system imbued with Sufist ideas surrounding harmony. And through an intricate molding process, Paola Sakr immortalized the ghostly textures and supple shapes of knitted textiles onto an array of clay tableware that evokes the hospitality and warmth of traditional Lebanese dining rooms.

What began as an experiment in textiles became a tour de force of the world’s diversity of cultural expressions and handicraft traditions. “It has become a pure labor of love for all involved,” continues de Gier, who selected the designers alongside a curatorial team of Annina Koivu, Johanna Agerman Ross, Renee Merckx, and Jeffrey Bernett. Below, three participating designers reflect on their concept and creative process.

I wanted something with a temporary feel—an object that feels transitional so it can mimic the feeling of a gallery space. I’ve always fetishized the waiting room. There’s something romantic about it not being a destination, but a transit, so I settled with the idea of making four seats organized in a row.

Each seat has multiple panels upholstered with different or matching Kvadrat knits, offsetting each other. There were multiple collections of knits, very different in texture and look, but that share a luxurious and bouncy sensation. Either contrasting or complementing, it felt like they brought out the most in each other when combined. I also love the contrast between metal and upholstery—it’s a very classic detail—so I introduced a powder-coated aluminum frame. Visually, it plays well with many of my works, which feature a line or a frame in some way.

We started by looking at the history of dining and seating in the Eastern world, specifically the Middle East. Seating in these cultures is low, often on the floor, and arranged at the perimeter of a room. It’s a style that has been embedded in society from an early time, with practical and spiritual roots. We had the seating concept in mind but when we found the right textile we knew it would help us push the design even further. We also utilized the textile’s color to create a meticulously curated color selection that’s meant to generate an emotional response.

Knitted textiles helped us expand our thinking for the upholstering and soft seating category. The options for shapes that we can use are limitless and the opportunity to play with incredibly potent colors add fresh challenges to speak to people in new ways.

The fabric I used, Uniform Melange 683, has a bold and dimensional appearance and provides a structured look. Its thickness, along with the dimensional color quality that transforms from hues of purple to blue, which provides an almost iridescent look, were the qualities I was drawn to the most. These aspects of the material were a point of departure—in my practice I challenge typical, everyday typologies and forms, so I wanted to challenge the use of upholstery and typology of the chair. I used the fabric to produce cushions that are both radical interventions and simple additions that drastically alter the form, function, and perception of any chair.

I usually work with hard materials and only recently introduced fabric and upholstery. I’ve been researching and looking for fabrics that can provide structural properties, like thickness, stretch ability, textured surface, or intense color. Kvadrat/Febrik textiles offer all of the above with additional qualities I found interesting, like pattern and knit dimensionality. To see and touch each style and color, and critically think about the possible uses of Febrik, allowed me to expand my understanding of fabrics as a starting point to design possibilities. This project opened up new creative perspectives—I’m now developing a project completely based on textiles and upholstery. 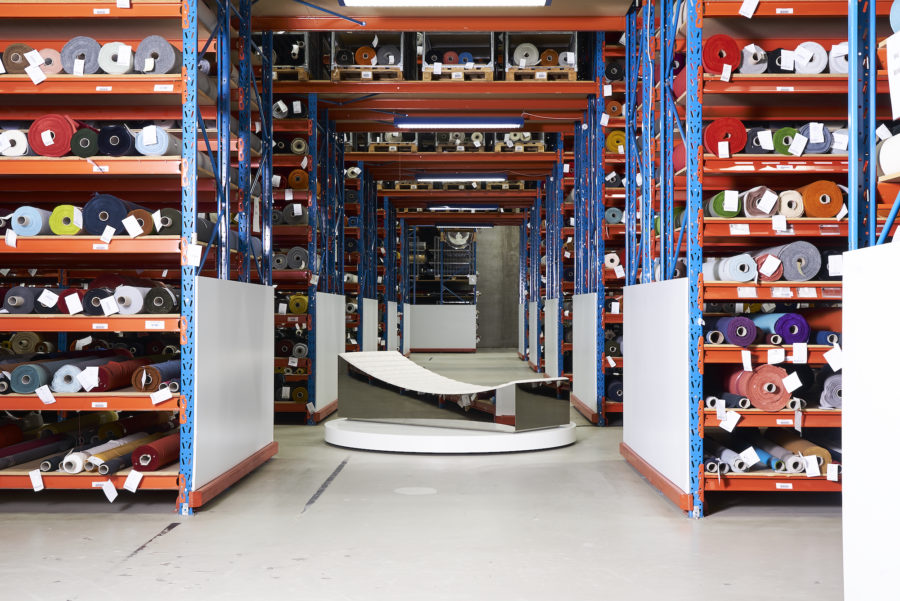