An exhibition of the artist’s new work—made from piling up, stitching together, and painting over found textiles—opens today at Marianne Boesky Gallery in New York.

By Min Chen
Photos by Tawni Bannister September 7, 2017
Share
Back

For Sanford Biggers, history is not a thing of the past, but an ongoing, unbroken current. It is always present in his work, which confronts and contemplates America’s yesterday—its folk heritage, its legacy of slavery, its treatment of the black body. In his visually and conceptually rich paintings, sculpture, and performances, the past is both a subject for reexamination and a found object. “We revisit history in order to add a different context and meaning to it,” he says. “I often think of history itself as a material—a malleable material.”

This practice has earned the 47-year-old, New York–based artist solo shows at Mass MoCA and the Brooklyn Museum and accolades including this year’s Rome Prize in Visual Arts. His exhibition “Selah” opens at Marianne Boesky Gallery in Manhattan this month and runs through October 21. It includes new work Biggers made in his Harlem studio, gathering fragments of fabric to be stacked, sewn, painted over, framed, and painted over again. “As interested as I am in found objects,” he says, “it’s also about the transformation of the object, doing another process or action that acknowledges its found nature but also puts something new into it.”

The convergence of cultures and contexts that Biggers’s layering creates has its roots in his life. He remembers, while growing up in Los Angeles, fabric shopping with his mother in a neighborhood populated with German and Japanese immigrants. Outside of his advanced placement art classes, hip-hop culture offered him artistic outlets in tagging, breakdancing, and deejaying. Then in 1992, he spent three years teaching English in Japan, steeping himself in Buddhism.

In 2007, he unveiled “Lotus,” a seven-foot-wide glass etching of a lotus flower, a Buddhist symbol of purity, its petals contrastingly detailed with diagrams of slave ships. It’s a work Biggers considers “conceptually autobiographical,” a meditation on two wildly disparate cultures that have directly and indirectly shaped him.

As much as his work has drawn on icons of the past, it deploys them to evoke contemporary inequity and violence, particularly as it is visited on the body. “Blossom,” presented in 2007, and his “BAM” series from 2015 are haunting examples. The former features a grand piano conjoined to a Bodhi tree, and the other, traditional African sculptures newly ridden with bullet holes—acute comments on lynching and police brutality respectively. Their import reaches beyond the walls of the gallery to prevent “historical amnesia.”

Eugenie Tsai, Brooklyn Museum’s contemporary art curator, who organized Biggers’s first museum presentation in New York, sees him working in the vein of such artists as David Hammons and Terry Adkins, in his inventive use of found artifacts to articulate the experience of being black in America. “There’s always something visceral and material about Sanford’s work that I respond to,” she says.

In particular, Tsai calls out his series of modified quilts, which Biggers began in 2012. Titled “Codex,” it sees the artist cutting, re-sewing, and embellishing antique quilts to construct modern statements on the patchwork that is America. While these handcrafted artifacts recall Americana, each fresh stitch and wash of acrylic paint or tar invites different frames of reference. The work on view at Marianne Boesky follows a similar process, layering onto the history of its source material.

For Biggers, history and context are living elements in the work, but even more resonant is the dialogue he has with them. “I consider myself a late collaborator,” he says. “We’re all trying to tell our stories.” 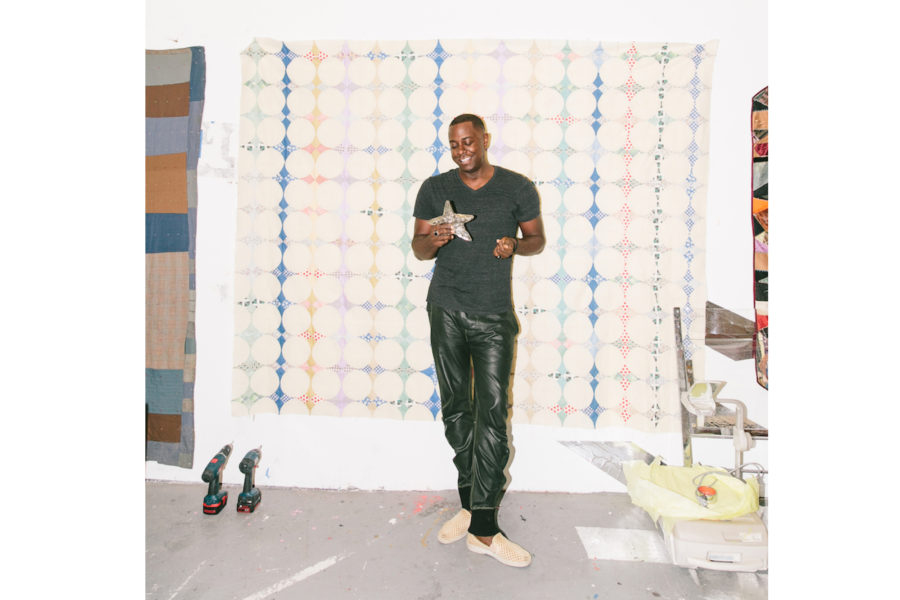 Becky Suss Recalls the Formative Interiors of Her...

Swizz Beatz Is Launching a Creative Agency in Saudi...

Designer of the Day: Maya Reik